Professor Kevin Scannell of St. Louis University will speak here at the University of Notre Dame's CSLC on Monday October 5th. He will be giving two talks in the Multi-Purpose Room of 329 DeBartolo Hall. Prof. Scannell will first present on Gaelic resources for Irish speakers and in the afternoon he will discuss his project on data mining of the social web on minority languages. All are invited.

Eadar-Ghaeilg: Scottish and Manx Gaelic resources for Irish speakers. 9:00 a.m. 329 DeBartolo Hall
Earlier this year I released a free bilingual Gàidhlig-Gaeilge dictionary together with an open-source Gàidhlig-Gaeilge machine translation engine. I'll talk about (1) how these resources were created, including a bit about the underlying mathematics (2) how they're being deployed to support Irish speakers interested in learning Gàidhlig, and (3) progress on similar resources for Manx Gaelic/Irish.

Corpus-based language technology for indigenous and minority languages. 3:30 p.m. 329 DeBartolo Hall
I'll discuss "An Crúbadán", a long-running project that involves mining the web and social media sites for texts in more than 2100 languages.  The linguistic resources we generate as part of the project are being used for linguistic research, but also in end-user applications for language revitalization,  It also provides the best available picture of the true linguistic diversity of the web.

Kevin Scannell is Professor of Mathematics and Computer Science at Saint Louis University in the USA.  He has collaborated with dozens of language communities around the world to create freely available and reusable language resources.  His main focus has been on software to help Irish speakers use their language online, including a spell checker, grammar checker, electronic thesaurus, and text input methods for mobile devices.  He has consulted on the Royal Irish Academy's Foclóir na Nua-Ghaeilge and on the New English-Irish Dictionary published by An Gúm.  In 2011, he founded the Indigenous Tweets project to promote the use of indigenous and minority languages in social media. 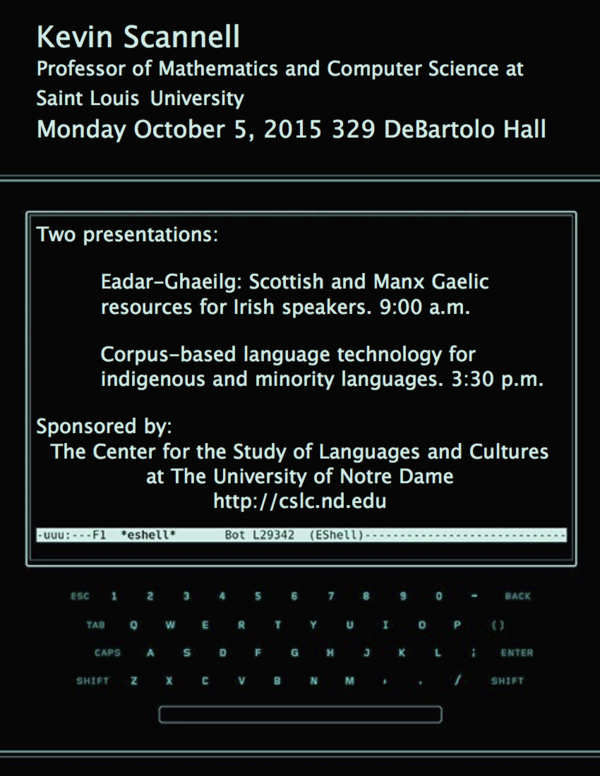