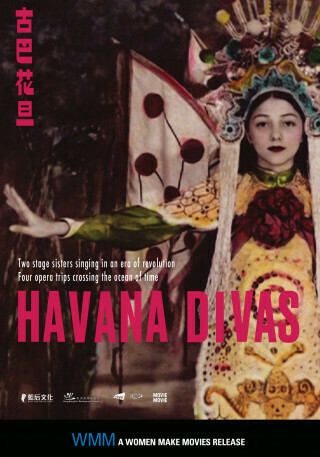 This event is free and open to the public. Tickets will be available at https://performingarts.nd.edu/ closer to the event date. Film screening will be followed by a live discussion with Louisa Wei.

Offering a window into the experience of Chinese migration to Cuba, "Havana Divas" follows two Cantonese opera singers who perform for decades in Cuba before, and during, Fidel Castro’s revolution.

Stage-sisters Caridad Amaran and Georgina Wong, both of Chinese descent, learned the art of Cantonese opera from their fathers in Havana, Cuba in the 1930s. Caridad’s Chinese foster father immigrated to Cuba in the 1920s after his family forbade him to perform opera. Georgina’s father was a famous tailor in a Havana Chinatown, who encouraged her to learn kung-fu and traditional Chinese dance. The daughters spent their youth performing throughout Havana and among other notable singers until their lives were changed by Fidel Castro’s revolution. In their golden years, the two sisters attempt to revive Cantonese opera in a worn-out Cuban Chinatown and, together, make a new wish: to return to their fathers’ Chinese homelands to pay their respects.

"Havana Divas" offers a window into over 170 years of Chinese migration to Cuba. Through present-day interviews, precious photographs, and archival footage, director S. Louisa Wei (dir. GOLDEN GATE GIRLS) explores the shifting culture of Cantonese opera through a historical time and place. The film reveals the female spirit of the two stage sisters and makes an important contribution to a growing body of films documenting female artists and performers within the Chinese Diaspora.

Among her works, "Golden Gate Girl" portrays the life and times of Esther Eng, once honored “South China’s first woman director.” The documentary has received positive reviews and attention from The Hollywood Reporter, Voice of America, South China Morning Post, San Francisco Chronicle, etc. Elizabeth Kerr of The Hollywood Reporter praised the documentary for its seamless ability to weave history, Sino-U.S. relations and social standards together to allow for inference and context. "Havana Divas" is a sister work covering the Chinese immigrants’ life and the traveling Cantonese Opera in the Chinatowns of North and Latin America. It focuses on the art of two divas who learned and performed Cantonese Opera in Havana in the 1940s and performed throughout the country. They made their way to Hong Kong and Guangdong Province, China, in their 80s, finding a new audience out of expectation. Both films have travelled to many film festivals around the world.

Wei makes historical documentaries from an explicitly personal perspective as a means to advocate for significant figures and voices lost to historical process. She plays the simultaneous roles of director, writer, and editor, not to establish a singular subjective viewpoint, but to ensure that life and the people in her films are presented intact, with all the complexity and failings of human intellect and sense. Her broader research beyond each documentary she made has been published in monograph and book forms. Esther Eng: Cross-Ocean Filmmaking and Women Pioneers (2016, co-author Law Kar) won Hong Kong Book Award in 2017. Wang Shiwei: A Reform of Thinking (2016) won the Best Publishing Prize in the Fiction and Literature Category at Hong Kong Biennial Publishing Award in 2017. Wei researched widely on women directors and writers, incorporating her findings in books like Cinema East and West (2016) and Women’s Film: Dialogue with Female Chinese and Japanese Directors (2009, co-author Yuanying Yang).

This event is part of Border Crossings in Asian Humanities, a series examining transnational Asian experiences. The "Havana Divas" screening is cosponsored with the DeBartolo Performing Arts Center.