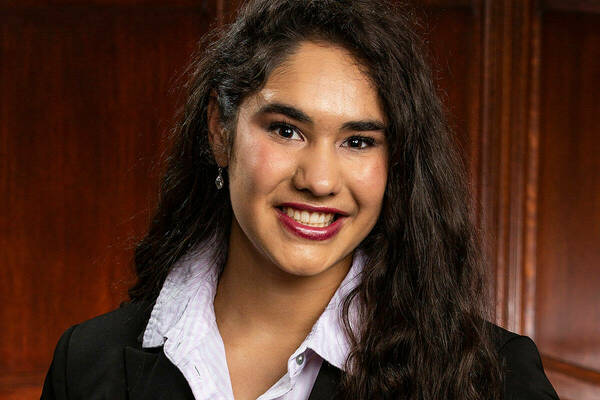 What do studio art, German, history, fairy tales, and subverting gender tropes have in common?

Notre Dame undergraduate Naya Tadavarthy has used all of them in creating her senior thesis project.

Tadavarthy’s wide range of academic interests have now culminated in a perfect ending — she’s writing and illustrating a children’s book about German author Gisela von Arnim, who was creating protofeminist fairytales as a teenager in the 1840s, at a time when the world lacked female-focused literary figures.

A studio art and German major with a minor in history, Tadavarthy has drawn on the skills she’s developed in all of her programs to produce the book, conducting research in both English and German while producing illustrations using watercolor paint and pencils.

“The thing that really compels me is stories. I have loved literature and narrative my entire life, since my mom would read picture books to me sitting on the floor of my bedroom,” she said. “I see this passion for narrative reflected in all of the things I study — the liberal arts in general are about finding stories about people.”

As the culmination of her Notre Dame education, her project demonstrates the range of abilities she’s developed over the past four years.

“As an art major, I can convey narrative visually. As a history minor, I can study the stories of what has already happened,” she said. “And as a German major, I can learn how to express narrative in a language other than my first one.”

“As an art major, I can convey narrative visually. As a history minor, I can study the stories of what has already happened. And as a German major, I can learn how to express narrative in a language other than my first one.”

Tadavarthy’s inspiration for her senior thesis project dates back to her first year at Notre Dame, when she first heard about von Arnim in a German class on fairy tales.

“I thought that she’d be a really good role model for children and an inspiration of how to pursue your own creative passions,” she said.

The opportunity to use creativity as a force for good in the world, in fact, was what attracted Tadavarthy to Notre Dame in the first place. When visiting campus as a high school senior, she was pleasantly surprised to find how open and enthusiastic students were about the topics they were studying.

“I’d never been somewhere where students talked so much about being a good person in addition to excelling academically in your job and in your career,” she said.

Tadavarthy began her first year at Notre Dame knowing German would be a core part of her academic experience — she’d studied the language since sixth grade and wanted to become fluent by the end of college.

She dreamed of one day working as a costume designer, so she started taking courses in the Department of Art, Art History & Design, eventually settling on studio art as her primary major. Each class turned out to be valuable even if it didn’t contribute to her major requirements — especially graphic design, which more than anything showed her that wasn’t a path she wanted to follow.

“But I’m honestly so thankful that I took it, because the skills that I learned in that class are completely invaluable to me now in studio art — being able to use stuff like Photoshop and Illustrator can really, really enhance my art practice,” she said.

As she progressed further in studio art and German, though, Tadavarthy realized she really missed studying history. She added it as a minor and discovered an array of fascinating classes, including two — History of Modern American and European Fashion and Fashioning Identities in Colonial America — that related to her professional aspirations.

Throughout her coursework, she’s also discovered the ways in which a liberal arts education helped her grow, from strengthening her critical reasoning skills to developing a deeper sense of empathy, compassion, and understanding for others.

After graduation, Tadavarthy will spend a year in Austria doing research and teaching English after being named a Fulbright U.S. Student Award winner. Her project will focus on the connection between theatre costumes and fashion in 19th-century Vienna.

She then hopes to pursue a career as a costume designer, a passion she furthered through classes in the Department of Film, Television, and Theatre.

Her skills shined through during FTT’s production of This is Modern Art, in which Tadavarthy oversaw the costume design and had complete creative liberty.

“A big part of working in theatre is not only promoting your own artistic vision but also being able to adapt, to understand, and elevate the visions of other people,” she said. “So all the collaborative work I’ve done here — the discussion-based classes, learning how to communicate with people —  is really going to benefit me in that area in the future.”

Originally published by Indonesia Brown and Josh Weinhold at al.nd.edu on May 05, 2022.