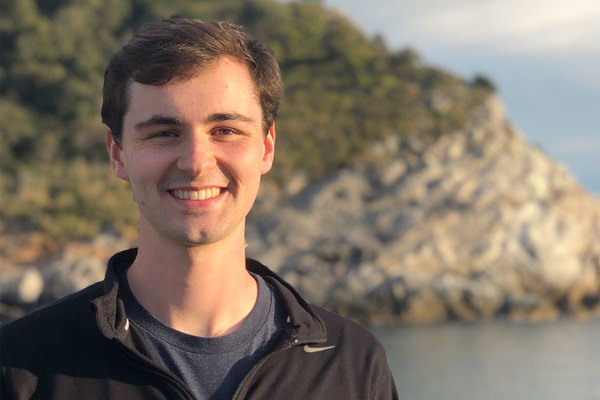 Matthew Canonico ’20 has won the Dante Society of America’s Dante Prize for best undergraduate essay — the third time since 2014 that a Notre Dame student has received the award.

“There are a lot of hidden treasures in Dante,” he said. “Sometimes when reading Dante, something would click, and I’d get tingles down my spine. It’s an inexhaustible piece of art that, 700 years later, is still inspiring scholarship.”

Canonico described the two-course Dante program offered by the Department of Romance Languages and Literatures as some of his favorite classes at Notre Dame — and he becomes animated when discussing Dante.

As he explains a scene from the Divine Comedy that served as the basis for his essay, he uses his hands to gesture to an imaginary candle and mirrors, the setup of an experiment Dante discusses in Paradiso, the third canticle of the Divine Comedy.

The upshot of the experiment is to demonstrate that mirrors at different distances may produce reflections of the candle that are smaller, but the reflections are no less bright. Dante uses this as an analogy for the human worldview — though people may perceive differentiation all around us, everything exists more fundamentally in the unity of God.

“With the experiment he sets up, Dante is exploring some rather deep theological questions by appealing to the physical – to geometry, optics, and math,” Canonico said.

With his background in math, Canonico naturally latched onto it as a theme he explored in Paradiso.

“I tried to use mathematics as an avenue to Dante’s understanding of God as the ground of all being. I found that the experiment he describes early on in Paradiso is very useful for understanding the rest of his journey to the Divine,” Canonico said. “It’s not at all an obvious thing that Dante is communicating, so it’s extremely gratifying when it clicks at some point.”

At the encouragement of Christian Moevs, an associate professor of Italian, Canonico submitted his essay, “The Divine punto: From the Mirror Experiment to the Primo Mobile,” to the Dante Society of America’s contest at the end of his senior year. It was also recently published by the McGrath Institute’s Church Life Journal.

“When I was notified that I had received the award, I was surprised and honored, and I was also very grateful to my Italian professors for providing the space and environment for their students to engage in such work,” Canonico said.

“Studying the liberal arts means learning how to learn and setting yourself up for a path of lifelong learning. The whole point of graduating with an Arts & Letters education is that you’re now prepared to encounter life with these second, third, fourth interests and you’re not afraid to find new interests and to cultivate them.”

Outside of his essay, Canonico found other unexpected parallels between studying math and studying a foreign language.

“Each one of those disciplines can illuminate the other. While I didn’t realize it at the time, I think part of why math interested me is because it is a language in its own right,” Canonico said. “It was a way of translating the natural world and numbers into its own cohesive language. And that’s what studying a foreign language does — you have to mold your mind to a new way of thinking and speaking.”

Canonico first took an Italian class on a whim during his first year, inspired by his older brother, Domenic, who attended Notre Dame and majored in Italian

Having never seriously studied a Romance language before Notre Dame, Canonico immediately became hooked by the beauty of Italian and encouraged by his ability to converse after just one semester.

“The beauty of the language just made it so fun to speak,” Canonico said. “I really loved learning it and I kept signing up for classes — so the requirement became a minor which became a supplementary major and then finally a major. I just had no reason to stop.”

Canonico attended events organized by the Italian program to practice his language skills with professors and fellow students, studied abroad in both Florence and Rome, and had conversations with his brother in Italian, which held particular significance for the siblings because of their Italian heritage.

Beyond mastering the language, Canonico took various poetry and literature classes, studying everything from the writers of the Renaissance to early 20th century Italian American history.

“Almost any Italian language interest you could have was addressed if you wanted to pursue it,” he said. “The course offerings were very diverse and very fulfilling.”

Learning how to learn

Studying Italian altered the way Canonico thought about even the most basic building blocks of language. It gave him a new lens through which to view the world — a tool he has employed in his current job at a Beghou Consulting in Chicago.

“It changed the way I think and taught me how to adapt to different modes of speech and think creatively,” Canonico said. “If you can pick up a second language, then you should be confident that you can pick up a lot of things.”

While Canonico’s experiences in Arts & Letters helped prepare him for his career, they also catalyzed his intellectual curiosity — which won’t be slowing down anytime soon.

“Studying the liberal arts means learning how to learn and setting yourself up for a path of lifelong learning,” he said. “The whole point of graduating with an Arts & Letters education is that you’re now prepared to encounter life with these second, third, fourth interests and you’re not afraid to find new interests and to cultivate them.”

Originally published by Sophia Lauber at al.nd.edu on June 01, 2021.