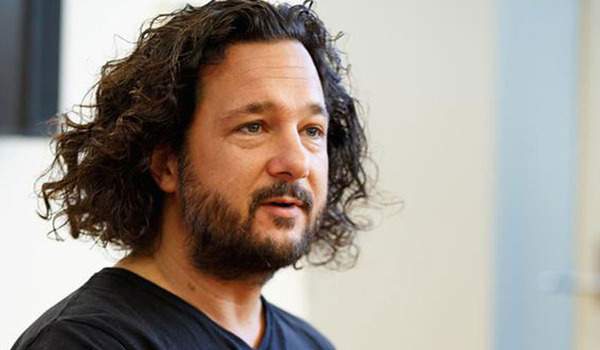 The Ansari Institute will honor Tyson Yunkaporta, an Indigenous Australian scholar and the author of Sand Talk: How Indigenous Thinking Can Save the World, as the winner of its Nasr Book Prize.

Funded thanks to the generosity of Drs. Sherif Nasr and Randa Nasr, co-founders of siParidigm Diagnostic Informatics in Pine Brook, N.J., the prize highlights the work of scholars who reimagine the connection of religion and global affairs.

Yunkaporta's book, which has earned widespread acclaim, raises important questions and brings Indigenous ways of knowing to the critical examination of global systems. In so doing, it enriches the larger public conversation.

Yunkaporta will visit the University of Notre Dame’s campus Oct. 2-3 for several public events, including a multi-faith symposium, that will explore his work and allow the Notre Dame community and the public to hear his insights.

“We are all refugees, severed from the land, disconnected from the genius that comes by being in symbiotic relationship with it,” Yunkaporta said. “Yet rarely do we see the sustainability of our world analyzed by the Indigenous peoples whose patterns still flow with the movement of the earth.”

Yunkaporta’s book aims to bridge that gap, drawing on his background as a member of Apalech Clan in far north Queensland. In the work, he dialogues with others in the collaborative style of Aboriginal “yarning” between two people, using the term “us-two” for a pronoun that has no English equivalent. “I have built every chapter on oral cultural exchanges,” Yunkaporta writes, “a series of yarns with diverse peoples who all make me feel uncomfortable.”

One of the problems with today’s world, Yunkaporta argues, is linear and formulaic thinking, in contrast to traditional ways that are complex and dynamic. Writing—the fixing of elusive thoughts onto paper—by its very form runs counter to Aboriginal epistemology. Yunkaporta wrote the book anyway as an attempt to build a bridge between cultures: “For each chapter, I carved the logic sequences and ideas arising from these yarns into traditional objects before I translated them into print.” Representing thoughts on sand is sand talk: The patterns are there for a moment, before reuniting with the patterns of eternity whence they emerged.

“As we confront urgent global challenges such as climate change, conflict, and inequality, we can learn much by incorporating under-appreciated perspectives,” he said. “Indigenous insights can strengthen humankind’s shared work to build a sustainable future that promotes dignity and flourishing. Tyson invites us—rather, he challenges us—not only to take indigenous thinking seriously, but to take it to heart, to change not just what we do, but to rethink who we are.”

This year, more than 30 works were nominated for the award. A selection committee chose five finalists before unanimously selecting Sand Talk. The committee included Mirza; Carolyn T. Brown, board chair of the Fetzer Institute; Clair Brown, professor of economics at the University of California, Berkeley; and Anantanand Rambachan, professor of religion, philosophy, and Asian studies at St. Olaf College and co-president of Religions for Peace. The Ansari Institute’s faculty committee provided input in the early stages of the selection process; faculty members Alexander Hsu and Charles Powell participated in the committee’s deliberations on the finalists.

“Yunkaporta’s explication of Indigenous wisdom and ways of being in our world is a powerful challenge and contribution to our search for a sustainable life for all beings and just relationships on our planet,” Rambachan said.

When Yunkaporta learned he was the winner of the Ansari Institute’s Randa and Sherif Nasr Book Prize on Religion & the World, he responded with disbelief: “It’s just a little book.” But the work makes important contributions to the public conversation. It does so in the spirit of the book prize, which aims to amplify the work of scholars who reimagine the connection of religion and global affairs. The goal is to stimulate broader discussion about how ancient wisdom, as transmitted in the form of the major religious and philosophical traditions of the world, can inform and even transform current debates.

Yunkaporta’s visit will include a range of activities to help facilitate further discussion of the ideas discussed in Sand Talk. Events will include:

“The Ansari Institute is a ‘crossroad of religions,’ a place where people from different traditions can respectfully engage with each other and learn from each other,” Mirza said. “We look forward to engaging with Tyson Yunkaporta and with others in deep and fruitful dialogue. We hope that our gathering represents a kind of fellowship of faiths that strengthens over time, generating badly needed perspectives for addressing some of today’s most pressing global challenges.”

Originally published by Josh Stowe at ansari.nd.edu on May 25, 2022.