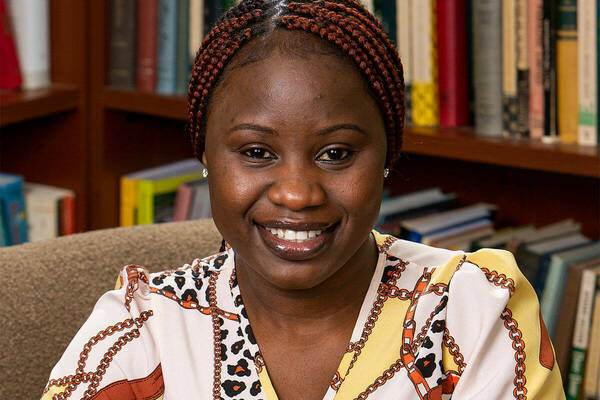 Godiya Simon came to Notre Dame needing to learn a language in order to be successful. Now, she’s headed to an elite graduate program in part because of her work to ensure another language never goes extinct.

Simon didn’t know just how rare her native language was until a conversation one day with her linguistic anthropology professor, Susan Blum — a realization that inspired her to create a cross-continental multimedia effort to preserve and document it. In the process, she’s written a senior thesis, created a children’s book, spent a summer in Hawaii learning research skills, presented at a conference, and developed a clear vision for her post-graduate goals.

“I want to give back to my community and inspire girls that they can also go to school and make a difference — in our community, in Nigeria, and in the whole world,” she said. “I want to be a mentor and create opportunities for them.”

A native of Nigeria, Simon grew up speaking Kibaku, a language known by only 200,000 people in a region of her home country. Her secondary education was conducted in Hausa, another largely Nigerian language, and she also speaks Fulani.

While she was likely one of very few Notre Dame first-years who knew four languages, English was her weakest. During her first few months in South Bend, Simon worked constantly on reading and writing, often pulling all-nighters developing her abilities.

“I had so many different resources that I found and used at Notre Dame to help me get better,” she said. “And all those things helped me to overcome these challenges — everything has changed since my first semester here.”

“I want to give back to my community and inspire girls that they can also go to school and make a difference — in our community, in Nigeria, and in the whole world. I want to be a mentor and create opportunities for them.”

An introductory anthropology course with James McKenna, now faculty emeritus in the Department of Anthropology, was a revelatory experience. For Simon, those class sessions offered completely new perspectives on how the world worked, how humans have developed over time, and cultural differences in parent-child relationships. She was fascinated, and was even more intrigued after talking with McKenna about the range of opportunities the field offered.

So she declared an anthropology major and soon found herself in a linguistic anthropology course, discussing endangered languages. As she heard more about what that term meant — a language that was at risk of disappearing due to never being written down and spoken by a relatively small number of people — she realized Kibaku itself was endangered.

That notion stuck with her, and Simon talked about it frequently with mentors and close friends, including Dinah Lawan, a fellow Nigerian native and Notre Dame undergraduate. Her language needed to be documented, and if anyone was going to do it, why not her?

“I thought at first, ‘How could I do this? I am young, I’m just an undergrad, so I don’t think this will be easy work for me,’” she said. “But if we do not preserve this language, I’m afraid it will die soon.”

As a sophomore, Simon began researching Kibaku nouns, translating and transcribing about 1,000 words. A year later, she received grants from the Institute for Scholarship in the Liberal Arts and Keough-Naughton Institute for Irish Studies to spend five weeks during the summer at the University of Hawaii Manoa’s Language Documentation Training Center, where some of the world’s foremost experts on language preservation work.

The program introduced her to the process of preserving a language and the skills she needs to go about it — how to best use video and audio recordings, manage data efficiently, use software to catalog words, and more.

“ISLA made a huge difference for me, giving me the funding to travel and do this kind of project. It was such a blessing to me,” she said. “People where I’m from think girls are not supposed to go to school, so coming to Notre Dame was like a dream come true for me — and here I am, doing this important work and learning all these things.”

‘They didn’t believe their eyes’

Simon then received a grant from the Balfour-Hesburgh Scholars Program, which assisted her throughout her time at Notre Dame, allowing her to create and manage groups on various social media platforms with fellow Kibaku speakers back in Nigeria. The young people Simon recruited to those groups worked collaboratively to translate and define words, check spelling, and organize the data.

For all the work she’s done documenting her language, she’s pursuing the project entirely independently — not for academic credit. However, she is writing a senior thesis in anthropology analyzing how the social media groups she started have functioned, and the role online tools can play in connecting young people to preserve endangered languages.

Simon has also now written a children’s book in Kibaku, relating a story that was told to her as a child by her grandparents, and she has plans to write even more in order to preserve popular Nigerian tales that have been passed down for generations. Her research findings were also selected for presentation at an undergraduate conference last year at Johns Hopkins University.

One of her mentors, Irish language and literature associate professor Brian Ó Conchubhair, eventually found a Kibaku dictionary, published in 2015, and purchased a copy for Simon. It’s small, though, contains many incomplete definitions, and doesn’t account for different pronunciations of words in different regions of Nigeria or the fact that some words hold special significance in some places.

The importance of the work Simon is pursuing was reinforced when she brought that book home and friends and family members saw their language, written down on paper, for the first time in their lives.

“They didn’t believe their eyes — they said ‘No, this can’t be true,’” she said. “They went through it to see the spellings, and they were so excited. They wish they had so much more than a dictionary so they can read and teach younger generations — which makes me want to spend my time doing this.”

‘Ready to explore the world’

Beyond anthropology, Simon is minoring in studio art, which she pursued continuously after taking a ceramics class early in her Notre Dame career. Back home, she had made pots and plates out of clay, and her classmates were amazed at her ability.

As she’s progressed beyond pottery to drawing and painting, she appreciates that focusing on creativity exercises a different part of her brain.

“Any time I go to the art studio, I forget about all the reading, all the homework I have for other classes,” she said. “Focusing in that moment makes me have a relaxed mind — and makes me happy.”

Simon applied to 10 anthropology graduate programs, most of them with a focus on linguistics, and she will enroll this fall as a Ph.D. student at the University of California, Berkeley.

Over the last four years, Simon has learned so much — about English, Kibaku, and anthropology, but also about herself, her home, and her future potential. Growing up in a place where many people believe girls should not be educated, her career at Notre Dame is almost unbelievable, she said — and that’s inspired her to help others believe in themselves.

“Notre Dame has given me so much opportunity, and now I’m ready to explore the world — because of all the support, the classes I took, all I learned, and the new people I met every day,” she said. “And I think all that will help me go out there and make changes in the world — and be proud knowing I wouldn’t have done it without Notre Dame.”

“Notre Dame has given me so much opportunity, and now I’m ready to explore the world — because of all the support, the classes I took, all I learned, and the new people I met every day.”

Originally published by Josh Weinhold at al.nd.edu on March 31, 2022.