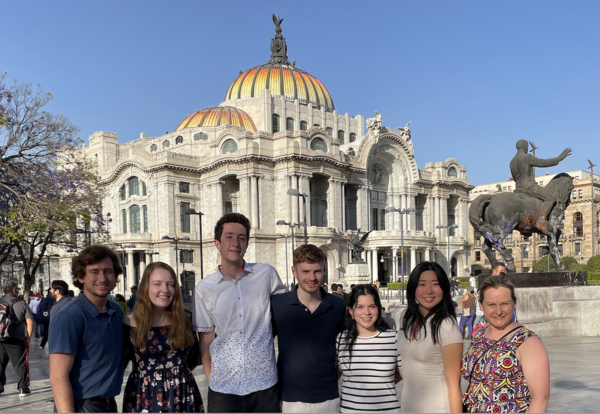 Students from the University of Notre Dame’s Economics of Immigration class spent their spring break in Mexico. The immersion experience in Puebla, led by Eva Dziadula, associate teaching professor of economics, and organized by Lisette Monterroso from the Mexico City Global Center, encouraged students to interact with migrants directly to see the origin of the economic models that they studied in class on campus. Dziadula’s class was joined by Notre Dame students spending their spring semester in Puebla.

During the week-long trip, students spent time at the Red Cross shelter in Ciudad Serdan and visited two of the train stops of "La Bestia," where they met migrants, most of whom were from Honduras. Students helped distribute donated food, clothes, and shoes and learned how Red Cross operates with local volunteers. They had a chance to contrast that model with two different church-based shelters in the city of Puebla that collaborate with local universities.

Students also visited Coyula, a small town in the Mexican state of Puebla that has a negative population growth due to emigration. They sat down with people who came back from the United States, some of whom had been caught at the border, and spent the afternoon playing with children in the community. Additionally, they had an opportunity to see what a university campus looks like in Mexico. Dziadula gave a guest lecture featuring her research on the role of U.S. immigration policy in marital stability at Tec de Monterrey, a leading Mexican university, and in turn Notre Dame students attended a class at Tec. There, they learned about internal displacement in Mexico, violence, and drug trafficking and discussed these topics with local students.

This experience provided students with insight into the motivations for migrating, which is one of the main objectives of the course. Their experiences showed the “push” factors that affect people’s choice to emigrate. Students reported migrants pointing to climate change, high unemployment, violence, and the desire to access better life conditions as central to their decision to leave their countries and try to reach the United States. Moreover, meeting migrants demonstrated how the costs of migration influence decision-making while also humanizing the phenomenon - migrants are more than just statistics.

Furthermore, this intercultural trip raised awareness of how the decision to migrate can be dangerous and life-changing and how migrants risk their lives daily. Therefore, it shaped the experience for many students, leaving a human perspective that cannot be embodied in economic models. It demonstrates why international experiences are central to Notre Dame and how everyone has a responsibility in the global community.

The group also visited Teotihuacán and Mexico City to soak in the history and culture before returning to campus.

Learn more about opportunities in Mexico.