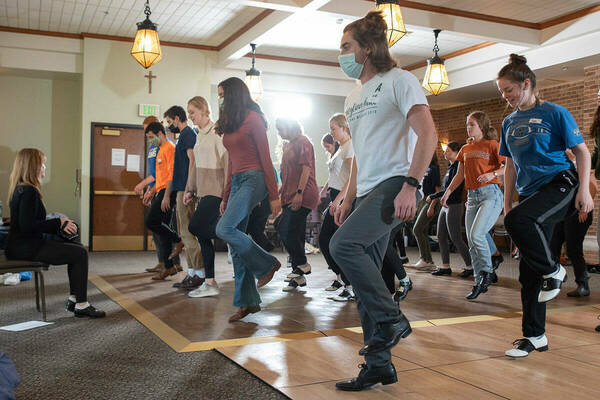 The business analytics major who’s pursuing a career in aerospace focuses on how the music in her Introduction to Sean-nós (“old-style”) Dance class makes her feel. And she dances.

Ryan heard about the class from a friend and was hesitant to sign up given her already busy schedule, but she eventually agreed to try it out.

Now she’s hooked — and learning about the old-style Irish dance has helped her to appreciate being in, and enjoying, the moment.

“While dancing there, I've started to be able to not care as much about how I look or what other people may be thinking,” Ryan said.

Becoming proficient in Irish traditions and having fun are precisely why Sarah McKibben and Shannon Dunne added the 1-credit old-style Irish dancing course and the 1-credit Irish Music: Tin Whistle & Tunes class to the Department of Irish Language and Literature’s offerings this year.

“We’re giving them doors, ways in — keys to unlock Irish culture,” said McKibben, associate professor and department chair. “It’s part of engaging fully with Irish culture, which is so robust.”

These courses, McKibben said, present a welcoming entry point for Notre Dame students to experience and learn about Irish culture — and consider taking additional courses in the department or studying abroad in Ireland.

“Especially amidst a pandemic, it’s important for students to have creative, fun ways to de-stress, form bonds, and to experience joy,” she said.

“We’re giving them doors, ways in — keys to unlock Irish culture. It’s part of engaging fully with Irish culture, which is so robust.”

Putting in the time

Dunne, a 1998 Notre Dame graduate who majored in medieval studies and has frequently traveled to Ireland to learn from tradition-bearers, is teaching both courses. An accomplished dancer, she also plays the tin whistle, button accordion, piano, bodhrán (drum), and concertina.

Sean-nós — a traditional Irish dance characterized by improvised close-to-the-floor steps in concert with music and a loose upper body — was kept alive for decades by families and communities in the remote Connemara Gaeltacht region of Ireland. Through performing and teaching it, Dunne hopes to be a part of that preservation process.

Those who have taken one or both of these classes will have a passport of sorts, or cultural currency, when they travel to Ireland, McKibben said, where people are often expected to share a song or dance in group settings. Some even carry a tin whistle in their pocket for just such occasions.

Those who oblige and join in, said McKibben, are demonstrating they’ve “done the work and put in the time to understand the culture.”

First-year student Peter Nagy is among those doing the work in the tin-whistle course — he looks forward to class every week and has enjoyed playing the instrument for friends.

“I get a lot of joy out of making music, once I can do it correctly,” said Nagy, who sings in the Notre Dame Glee Club. “The tin whistle is nice in this way because it is not difficult to learn. It is possible to play melodies fairly quickly, unlike other instruments where it can take a long time just to learn how to play notes and chords.”

Last summer, Nagy became intrigued with the instrument during his internship at the Southwest Indian Foundation in New Mexico, during which he helped build a shrine for St. Kateri of Tekakwitha, learned about the history of the Catholic Church in the Southwest, and put on a concert with a traditional folk band, Stilicho.

A fellow intern played the tin whistle and another taught the group sea shanties. They mostly sang together for fun, and occasionally at private dinners.

“It all happened very organically — which is characteristic of the traditional music we are learning in the tin whistle class, as well,” Nagy said.

During class, Nagy and his classmates sit in a half-circle facing Dunne. They watch a brief video, then play songs solo, in pairs, and all together. Posters with letters to indicate the notes of a song, rather than traditional sheet music, are on a wall for reference.

On a Tuesday afternoon in November, the group works on polkas (“Ballydesmond 2” and “Terry Teehan’s”), a jig (“Rolling Waves”), and a slip jig (“na Ceannabháin Bhána”). Dunne encourages and gives tips: “Make sure the holes are covered … Use the pads of your fingers.”

A few minutes after the tin whistle class concluded in a room in South Dining Hall, Ryan and 23 other students arrived for sean-nós dancing.

They talked and laughed as they shed their coats. Some laced up tap shoes. During class, they danced solo, in pairs, and in groups on the modular wooden dance floor. During some dances, Dunne shared music from her iPod. For others, she played the concertina.

Dunne said she wants students to feel comfortable in their bodies and be in a good place to continue to learn. Students needn’t be self-conscious — after all, this dance isn’t about any one person.

“It’s give and take. It’s not about consumption,” she said, adding that when people put themselves out there, everyone else should support them. “It’s about building community.”

When dancers were unsure of what to do next, Dunne advised them to keep going. “Don’t stop, just keep being you.” One poster reads: “When in doubt MARCH.”

Ideally, dancers do more than replicate steps, she said. It’s important to share a piece of themselves through the music — something one of the students did recently when doing an old-style Irish dance to a techno song at a football tailgate.

Twice this fall, students in the tin whistle and dance courses, as well as other musicians and friends, attended a céilí — a dance party — in the LaFortune Student Center Ballroom. Dozens gathered to dance, sing, and play music.

Originally published by Beth Staples at al.nd.edu on January 24, 2022.