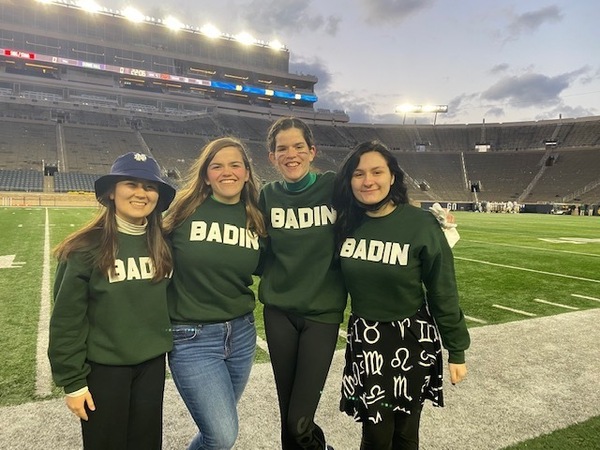 In high school, Lily Barth ’25 had the opportunity to study abroad in Japan. At 15, she participated in a “homestay” program, living with a Japanese family and speaking Japanese around the clock. She had taken Japanese classes throughout high school and fell in love with the language. Once she had the chance to actually visit Japan, she also fell in love with Japanese culture.

Now a first-year student at Notre Dame, Lily is an intended Japanese major with plans for a second major in English and a concentration in creative writing.

“I just love the language,” Barth says of her Japanese major. “At one point I found out that there was a scale of difficulty for learning languages from the U.S. Department of State and Japanese is rated at a Category 4…It’s one of the harder languages out there. And I was like, ‘This is a challenge. I want to try it.’”

She took the Elementary Japanese II class in her first semester, which involved learning the language through reading children’s books and graded readers in Japanese. Students were then required to produce their own creative project in Japanese.

“Last semester I wrote a children’s story about my dog totally in Japanese,” says Barth. "Right now I'm working on a creative art project and history lesson based on Heian court poetry from ancient Japan. I plan to recreate some of the ornate fans with my own Japanese poems written on them that were used in courting men and women."

She also enjoys her First Year Japanese II course. “It’s just one of those classes that I wake up excited about every day…There is even homework that I look forward to doing,” says Barth.

Barth cites another class, the Glynn Family Honors Program's Honors Seminar for first-years, as an example of the community atmosphere at Notre Dame. In this discussion-based course, it never felt like students were competing to see who could come up with the best ideas. “Instead, it's just us talking about a piece of literature that we’re all reading right now…working together to create a greater understanding of a piece as one. It’s a group effort, not an individual competition,” says Barth.

Meanwhile, she has also found community outside of class. Barth is part of the Glynn Family Honors Program, which brings together a group of students for both courses and activities that take learning beyond the classroom. Barth also participates in the Japan Club and Right to Life and is looking to get involved with one of the University’s literary magazines.

Check out the video above to learn more about Barth’s academic and extracurricular experiences at Notre Dame.

Originally published by Shannon Rooney at admissions.nd.edu on April 07, 2022.