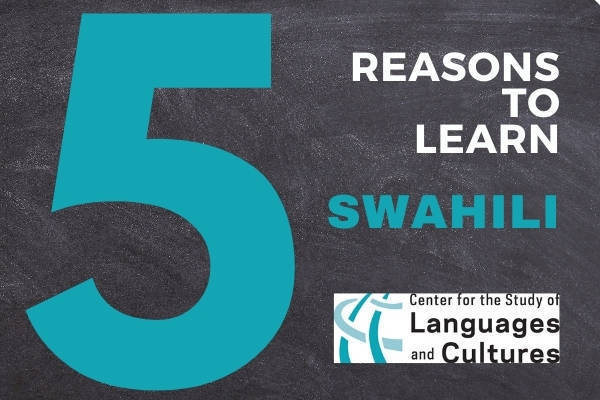 Swahili (or Kiswahili as it is called when one is speaking the language) is the most widely studied indigenous language in Africa. The national language of both Kenya and Tanzania, it is spoken as a native language all along the east coast of Africa from southern Somalia in the north down through the Kenyan and Tanzanian coasts. It is spoken as a second language by millions of people mainly in Kenya, Tanzania, Uganda and East Zaire. There are also speakers across the African continent and beyond.

The CSLC has put together a list of five great reasons to study Swahili this Fall.

As a student, learning a foreign language provides opportunities for scholarship and student exchanges. The more common the language, the harder it is to get funding. By studying a lesser commonly taught language like Swahili, you open up the door to opportunity that will allow you to explore a unique culture and country leading to study abroad.

In Swahili, there is a saying: MTU NI WATU, which means MAN IS A PEOPLE. The cultures of Africa have influenced the world, and the Swahili language originated as a commercial language through contact with locals and Arab traders arriving from the Middle East.  Over time, the primary influence of Arabic can be seen by many other languages such as German, English, French and Portuguese.

Knowledge of Swahili allows you to connect deeply with native speakers. Instead of saying "no problem", you make a completely different impression when you say "Hakuna Matata".

Reason 4: Deepen Your Knowledge of Poetry and Literature

Swahili literature rests on poetry and storytelling. While the oral traditions of Swahili continued well into the 17th century, the written literature of Swahili began in the 18th century. By studying these oral and written traditions, you deepen your understanding of language and gain insight into culture and gain a better understanding of the world.

Whether you intend to research, study and teach abroad, or learn about the economics of Africa in a global marketplace, Swahili is poised to become the language of commerce in Africa. Its usefulness for research and travel is one of the most cited reasons given for studying Swahili. Many schools offer Swahili as an elective, and IT infrastructure is growing which will enhance economic and research  opportunities.

In the Fall of 2021, the Center for the Study of Languages and Cultures (CSLC) is offering students the exciting opportunity to learn about a language and culture that can help to open unique doors to research, encourage study abroad, and discover economic opportunity.

Six courses will be offered to undergraduate and graduate students in the Fall in beginning and intermediate Swahili.  Clement Kigelulye, a Fulbright Foreign Language Teaching Assistant from Tanzania, is coming to Notre Dame to teach Swahili as a native speaker to students. He will not only teach the language, but also offer Notre Dame students the opportunity to learn about the culture and traditions of Tanzania through lectures and events.

The CSLC also offers language tutoring, language tables and cultural conversations for Hindi and Quechua. For more information about classes and events in Swahili and other Less Commonly Taught Languages, visit https://cslc.nd.edu/services/lctl/.