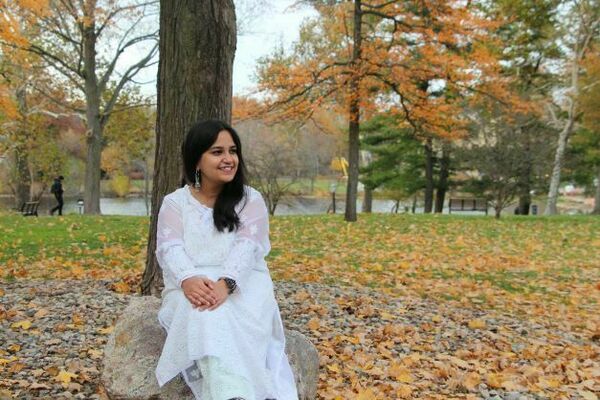 The country of India inspires impressions of colorful dresses, spicy food, oriental architecture and cricket, but this is only a small part of the culture of India and its history that reaches back for thousands of years. India is the largest democracy in the world and is home to roughly one-sixth of the world’s population. It is from this backdrop of land and language that Fulbright Language Teaching Assistant (FLTA) Amrita Sharma was born and raised. She now brings her knowledge of the language and cultural perspectives of India to Notre Dame, because a rich source of understanding this extremely diverse society comes from study of the official language of India, Hindi.

Amrita grew up in the city of Lucknow, the Avadh region’s most populous city and the capital of Uttar Pradesh. Located in northern India, the Avadh region is hailed as a diverse artistic hub, and is also known for the Hindu Muslim syncretism that reflects across its historical architecture and present day lingua franca. Amrita graduated from the University of Lucknow with a degree in English and pursued her master’s in English. She is in the final stages of completing a Ph.D. in American poetry from the same university. Her doctoral studies are focused on the ‘language-centered’ poetic discourse and the relationship between language, poetry and innovation.

Amrita wasn’t always a liberal arts student. Early in her student career, she pursued the sciences. Her decision to switch to humanities came from the influences of her grandfather who was a Hindi poet and writer, and her parents who encouraged her to take up her interests. She also credits the significant influence of poets around her that led her to continue research in poetics and language. She worked on her doctoral research under an established Indian English poet Dr. Ranu Uniyal, whom she sees as one of the reasons for her love of the arts.

Amrita has written poems, essays, short stories and book reviews for several literary platforms in India and abroad, and also worked as the poetry editor for her university magazine. She worked for the Lucknow Literature Festival, a three day event that celebrates creativity and brings together thinkers and writers from all over the world. She is currently working on publishing her first collection of poems. She also continues to work for an Indian NGO, the Rama Prasad Ghildiyal ‘Pahari’ Foundation, named after a prominent figure in Hindi literature.

Amrita is currently teaching Beginning Hindi I and Beginning Hindi II. In the Spring semester, she will be teaching both Beginning Hindi I and II, and Intermediate Hindi I. She is also continuing her studies here at Notre Dame, and is currently enrolled in an American poetry class with Professor McSweeny as well as a class through the CSLC. While here, Amrita describes her teaching experience in the American classrooms as one that is rewarding in more than one ways. An exposure to global academic setup provides an excellent opportunity for an intercultural exchange across both linguistic and social dimension. She believes that the concept of cultural shock does not remain valid in a rapidly globalizing world order where information and understanding remain an ever-expanding realm.

After completing her Fulbright, Amrita intends to continue on her academic pursuits with writing, researching and teaching in diverse cultural setups. She strongly believes in the power that language holds and the impact of literature on human society. While new ideas and technology evolve each day, it is the ‘language’ that remains the medium of every exchange. Amrita also wishes to research on the integration of technology with linguistic manifestations and beyond. She credits every human and literary resource around her to be an inspiration for her work and appreciates and strongly believes in the potentials of community engagement and intercultural collaborations.

While languages are difficult to learn, Amrita was quick to encourage students to pursue the study and acquisition of a new language. She said that new languages provide the medium to learn a new culture and help you grow through exposure to new cultures. She also believes that the lack of learning a new language provides a significant barrier to personal growth. Without target language proficiency, you will never be able to truly understand a new culture. Her advice to those working towards bilingualism is to focus on where the language comes from and how it functions in society, avoiding getting lost in grammar. By knowing the place and the people that speak the language, you can cultivate greater interest in the language and motivation to learn it. Once motivated, language acquisition no longer remains a challenge.

Featured image photographed by Paulina Romero Sanchez ('25). Paulina is a Neuroscience and Behavior major who specializes in social media design.