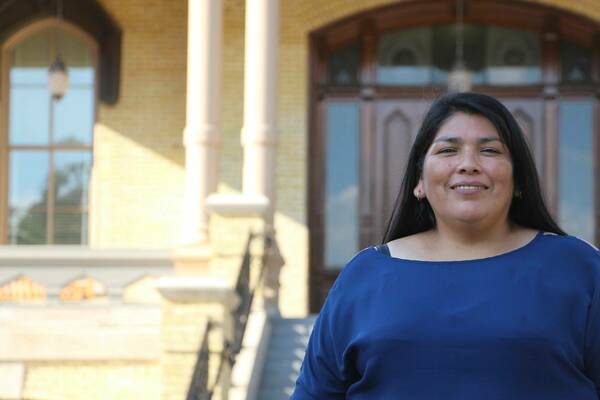 Quechua, an indigenous language in South America, is described by many as “sweet on the tongue”, and Quechua speakers are found in every level of society in Bolivia. Quechua speakers are also popping up across Notre Dame, as well. This year, the source of Quechua at Notre Dame is Delia Salazar Acuna, a Fulbright Language Teaching Assistant (FLTA) from Bolivia who specializes in teaching Quechua.

Delia is from Cochabamba, Bolivia, and she described Cochabamba as a city with rich, cultural foods, a climate that has earned it the name of the “Eternal Spring City”, and an expansive landscape that illustrates the expansive biodiversity that is in Bolivia. As with many in Bolivia, Delia is a native Quechua speaker and said that it is very common in Bolivia for people to be bilingual in both Quechua and Spanish. Illustrating the rich history of the region, Quechua is a language originally spoken by the Incas and is still the language spoken by the indigenous people in north-western South America.

Delia studied linguistics as applied to language teaching at Universidad Mayor de San Simón. After graduating in 2010, she began teaching at the elementary level and then moved into teaching at the University of Mayor de San Simón. Delia discovered the Fulbright fellowship from friends while working at the university. Originally, she wanted to stay in the U.S. for two months, but she was convinced to apply to the year-long program and has not regretted it. Delia did not choose Notre Dame, as the Fulbright program assigns FLTAs to schools and universities across the United States, but Delia feels extremely blessed to have been placed at Notre Dame.

Delia has always felt a calling to teach and is extremely happy that it has taken such a strong role in her life. Delia recalled early memories of her taking stuffed cats and dogs and lining them up like they were in a classroom, and writing on paper to teach them. Now that Delia has realized her dream of becoming a teacher, she loves her job and teaching helps her relax. As an instructor for the Center for the Study of Languages and Cultures (CSLC), she teaches beginning and intermediate Quechua classes. This semester, Delia is teaching two sections of beginning-level Quechua classes. She is also doing several Language Conversation Tables throughout the year to share the culture of Bolivia. Three of those presentations are scheduled for the Fall semester:

When she’s not teaching classes, Delia is taking classes at Notre Dame like Methods in Second Language Teaching (CSLC 30102) and Academic & Technical Presentations for International Graduate Students (CSLC 73005). She chose these courses to help her better learn English. Delia says that taking classes is a great way to help improve her English skills and also engage with the Notre Dame community.

Delia takes great pride in being able to share her language and culture with South Bend. When asked about a part of her culture she wanted to share with me, she immediately started talking about the Quechua concept of Pachamama. Pachamama loosely translates to “mother nature”, and the Quechua people hold her in great esteem. They feel that they must be respectful of their relationship with nature because if they take care of nature, nature will take care of them.

Delia is excited for what the rest of the year holds and gave advice for language students, “Make sure to find strong motivation in studying your language and surround yourself with exposure to the language by watching movies, listening to music, and finding ways to practice speaking with others. Make it interesting to learn!”