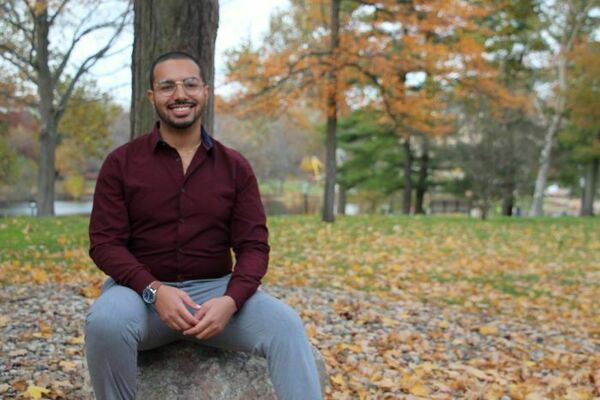 The beautiful South American country of Brazil spans from the Amazon Rainforest to the coast of the Atlantic Ocean, and is inhabited by cultures as diverse as its landscape. Brazil is a mix of peoples that includes indigenous tribal people, Afro-Brazilians, Italian-Brazilians and Portuguese descendants, to name a few. This mix of cultures creates a colorful and vibrant tapestry of music, food and language in Brazil's metropolitan areas like Goiânia, the setting of Portuguese FLTA Michel Soares do Carmo’s youth.

Michel is from just outside the favelas, or slums, of Goiânia and struggled with poverty, violence, and food insecurity as he grew up. However, Michel had a passion for learning that helped him to persist despite the many challenges he faced. One of the largest hurdles he faced was the poor quality of the educational system in his community, but his love of learning helped him to enhance his own education through self-study. It was during these years that Michel began to learn English on his own, making daily visits to the library to study English grammar books. It was also during this time that Michel cultivated a deep passion for social justice that has shaped both his character and his academic pursuits.

After graduating high school, he enrolled in the prestigious state school, the Federal University of Goias. Because his complex family background gave him a unique lens into the social and economic issues found in Brazil, Michel began to study journalism. However, he soon realized that journalism was not an ideal fit and completed his undergraduate studies with a major in teaching languages with a focus on Portuguese. Eventually, Michel became involved in graduate-level research. From this, he was inspired to begin research of his own and received several research scholarships, which helped him to complete and was able to complete his undergraduate degree   research scholarships. Michel was the first person in his family to graduate college, but went even further by graduating from the same university with a master’s in linguistics.

Now on campus, Michel works as a teaching assistant in Professor Marcio Bahia’s Portuguese classes. He is also taking two semester-long classes: Academic and Technical Writing for Graduate Students with Professor Lisa Oglesbee and Methods in Second Language Teaching with Professor Alessia Blad-Miller.. Recently, he began a one-credit course designed to facilitate conversation about race. In his teaching, Michel works hard to use Portuguese education as a means to introduce more complex themes like social justice issues to students. Through discussions and activities, he provides students with another  lens through which to see the world.

Michel was quick to express his gratitude for the Notre Dame community. Adjusting to new cultures and languages is difficult, and he was anxious to arrive at Notre Dame. He was open in admitting that Notre Dame was not his first choice when he was accepted into the FLTA program, but he is now applying to Notre Dame’s Ph.D. program in anthropology and peace studies. He has become attached to the community at Notre Dame and he attributes his affinity for South Bend to the community. Furthermore, as someone who has not typically identified as religious, Michel was apprehensive about Notre Dame as a religious institution. However, he has been pleasantly surprised that Notre Dame gives the option of religiosity without forcing participation. This has cultivated greater curiosity and has encouraged him to continue to study and be a part of Notre Dame’s community.

When asked about the value of learning new languages, Michel reflected on the immense effect that learning a new language had on his personal development. He was given a window to a new culture and a new way of thinking. Through English learning, he was exposed to ideas that encouraged open-mindedness and diversity. As a self-taught English speaker, Michel is also no stranger to the challenges of learning a new language. His message to students is to be extremely patient with yourself and to try to move outside of your comfort zone. Mistakes are part of the process of learning, and without trying to speak and making mistakes, you will never be able to learn the language.

Michel will be teaching Intensive Beginning Portuguese for Study Abroad (ROPO 20215) in the Spring 2022 semester. He also leads the Portuguese Language Tables exploring games, music and more in order to share his language and culture with people interested in learning or practicing Portuguese. For more information about Portuguese classes and events, contact the CSLC at cslcstaf@nd.edu, or learn more about the Portuguese Minor at Notre Dame by contacting Professor Shauna Williams, Director of Undergraduate Studies at swillia9@nd.edu.

Featured image photographed by Paulina Romero Sanchez ('25). Paulina is a Neuroscience and Behavior major who specializes in social media design.