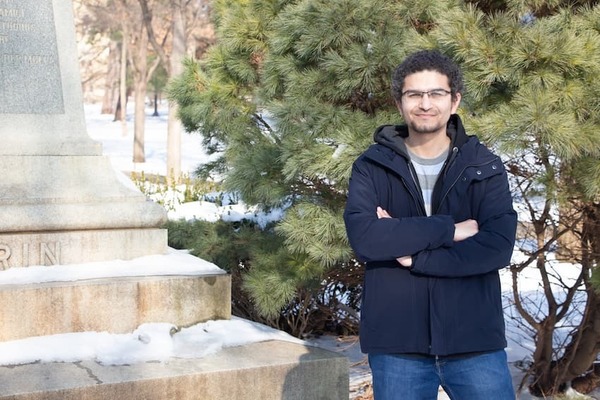 The country of Egypt quickly evokes biblical images of Moses and Pharaoh and the rich Christian tradition of the Old Testament. While a piece of Egypt’s history, Egypt is also an intellectual and cultural hub for Islamic scholarship and the country is often a beacon to the rest of the Arabic world. It is from this backdrop that Fulbright Language Teaching Assistant (FLTA) Osama Othman arrived in January to help in the Program in Arabic and Middle Eastern Studies at Notre Dame.

Osama grew up in the metropolis of Cairo. He enrolled in an urban school where math and science classes were taught completely in English in addition to high-level English language classes, offering a semi-immersive education experience that helped build proficiency at a young age. Osama’s memories of his early years included long bus rides to school, exploration of the bustling streets of Cairo, and vibrant culture surrounding food - including the traditional street dish of koshari and roasted pigeon!

Osama graduated from Ain Shams University and began to work as an accountant. It was then that he began to more seriously pursue his interest in language and literature. In his free time, he enrolled in Cairo University as an Arabic linguistics and literature student and taught Arabic to non-native speakers. Teaching introduced Osama to students from around the world and this was his first experience engaging in such a diverse set of backgrounds. Osama immediately fell in love with the position. Teaching allowed Osama to wear many hats by exploring his creativity through channels like writing short stories, podcast experimentation, and integrating Middle Eastern and Islamic culture to it all. He strongly believes that the best career is the career that makes use of every skill that you have. Teaching was this career for Osama.

Osama has had a variety of students over the years and he was able to draw on this experience to offer advice to current language students. The first piece of advice was that students must remember to utilize resources outside of the textbook assigned for any class. Each textbook is written with certain goals in mind, which might not always match up with each individual student. Therefore, it is important to search for and take advantage of different language learning resources online and expand sources of learning. Secondly, Osama urged students to remember why students started studying a language, not to lose sight of the goal, and to tailor studying to achieving the goal. Osama has had students that learn Arabic because they are interested in a variety of different subjects, including humanitarian work, philosophy, and religious studies. In some of these cases, students were not interested in conversing in Arabic but wanted to be able to read the writings of influential Arabic philosophers and religious thinkers. Osama stressed that studying will be more enjoyable and productive if it is tailored to the learner’s specific goals, whether these were practicing conversational skills or focusing on vocabulary and reading skills. Whatever the motivation may be, the most important thing is to start studying and find a way to make studying sustainable and enjoyable!

Osama recently decided to pursue a master's degree at the American University in Cairo. Osama hopes that the master's degree will help him travel and observe language instruction throughout the world, and potentially even meet up with former Arabic students that he has taught virtually. He has postponed his graduate studies to be Notre Dame’s Arabic FLTA for the Spring of 2022. Now on campus, Osama is assisting in three different Arabic classrooms. In his Arabic 1 classroom, Osama gives an authentic glimpse into Arabic culture, giving presentations that he has named “Scattered pictures from Egypt”. They feature information and pictures of a variety of Egyptian dances, geography, history, food, and other cultural elements. Osama has also pushed to incorporate Egyptian culture into the speaking activities, giving students realistic applications of what they are studying. In Arabic 2 and 3, Osama is a teaching assistant and capitalizes on the students’ higher level abilities to introduce them to influential Arabic authors.

Each year, the Center for the Study of Languages and Cultures brings FLTAs from all over the world to share their language and cultures with students at Notre Dame. On April 7 at 4:00 p.m., the CSLC will be hosting the FLTA Showcase. This is an opportunity for our current FLTAs to share their experiences with students, faculty and staff. All are welcome to attend. For more information, visit the event page.