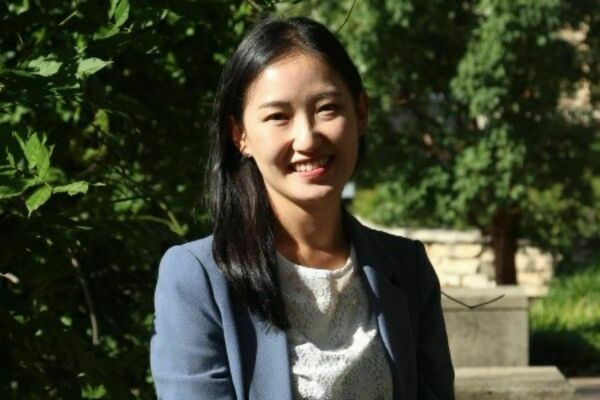 A recent Netflix series has hit number one recently in 90 different countries. You might have heard of it - it is called Squid Game. This series is a survival drama as seen through the eyes of South Korean culture and it has become so popular that you can even “Learn Korean from Ali Abdul Speaking Korean” on YouTube! Squid Game focused the country, language, and culture of South Korea in the minds of millions of people around the world.

But what Squid Game does not do is reflect the grace and elegance of the South Korean culture and language that has developed over 6,000 years. Fulbright Language Teaching Assistant (FLTA) Sunyoung Park is sharing that culture with her students and all those she meets. She has what seems like a permanent smile, and her openness to engaging with others is apparent from the first moment you meet her. She is curious about others and their cultures, and listens intently to what others have to say. And her knowledge and experience is a valuable addition to language learning  here at Notre Dame.

Sunyoung was born and raised in the rural area of Jecheon, South Korea, which is located about 75 miles southeast of Seoul, the capital of South Korea. After living most of her life in the scenic surroundings of this region (theUirimji Lake and the Uirimji Reservoir are popular tourist destinations), Sunyoung decided to take a risk and move to Seoul, the capital of South Korea, to study at university. She has been there for the past 10 years and enjoys the learning that living in a major urban area has encouraged.

Initially, the many differences to a small town were strange, especially the difference between the readily available support network of friends and family that she relied on in Jecheon, compared to the way she had to develop new relationships in Seoul. She saw this as a positive in many ways, including how the move to an urban area where she knew few people enabled her to feel confident in herself and pursue what she wanted, free from outside influences.

Shortly after beginning university, Sunyoung decided to take a break from her studies and travel. She lived and worked in Perth, Australia for six months. She said that her time there helped change her perspective on the world and opened her eyes to a new culture. She realized that Korea was not the only place where she could pursue her dreams. She had broadened her horizons from small, rural town to global perspectives. When she returned to Seoul, she applied to enroll in an exchange student program with the United States. In 2014, she was placed with Mississippi University and lived with American students for a semester. Her experiences in Mississippi left her dreaming of coming back to the United States, and so she began working towards that goal.

After graduating from Konkuk University a professor recommended that she take a course to be a Korean language teacher. Sunyoung said that teaching Korean just “felt natural”, and she knew that she wanted to make teaching language her career. She had the opportunity to teach English for a year but did not feel comfortable with her fluency in the language. She applied to graduate school to specialize in Korean education and taught Korean to international students. However, her experiences as a Korean teacher left her feeling that something was still missing. Her curriculum was very scripted, and she knew that integrating a more authentic method of language exchange into the classroom would be better for students to learn the language. As she considered her options, she thought about her time at Mississippi University and the more fluid curriculum that she experienced in her classes there. It was at this point that she came across the FLTA program, and immediately applied.

Now that she is at Notre Dame, Sunyoung teaches three  classes in Korean. She has immensely enjoyed the change of pace that teaching abroad has provided her, and she takes pride in guiding discussions in Korean and helping students hone their Korean grammar skills. The free-form American curriculum has allowed her to make her classroom truly her own, allowing her to know her students on a more personal level and to find greater satisfaction in teaching. Sunyoung is also taking classes at Notre Dame. One is the history of America during the 20th century, and the other is offered by the CSLC’s English for Academic Purposes program called “Academic and Technical Writing for International Students”.  In both these classes, she has been able to practice her English skills and become much more comfortable with the language.

In Korea, there is a unique way to think and speak, and different cultures have different ways to do the same things. Sunyoung has been grateful for all of her experiences as an English language learner, because it allowed her to explore a different side of her personality. She brings this understanding to her students, saying that while the journey of experiencing a new language and culture may be difficult, your ability to communicate with others is worth the struggle. She also emphasizes that while grammar is important, students should avoid getting caught up in the many rules of new languages. She strongly believes that to gain fluency, even if  your grammar is subpar, but you can communicate with native speakers in your target language, you will be well on your way to fluency.

And while Squid Game might help people to engage with the Korean language in a fun way, and YouTube can introduce the language, Sunyoung truly brings the language and culture of Korea to students here at Notre Dame in the best way possible - by sharing her knowledge and experiences with all of us here.

Sunyoung teaches several classes on Korean for East Asian Languages and Cultures and leads Korean Language Tables to share her her language and culture with people interested in practicing Korean. For more information about Korean events, contact the CSLC at cslcstaf@nd.edu, or visit the Korean Language home page at https://eastasian.nd.edu/korean/ to learn more about classes offered at Notre Dame.