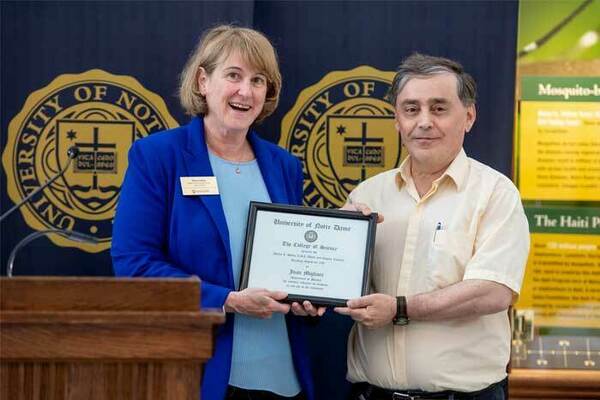 Juan Carlos Migliore, professor in the Department of Mathematics, is one of 30 scientists elected to the Latin American Academy of Sciences for 2021–22.

He is notably the first Paraguayan to be elected to the Academy.

“Paraguay is a developing country with a lot of young talent, and I hope that this will be a small step toward motivating some of the young people to feel that pure mathematics (and pure science more generally) is another option for them,” Migliore said. “They have many highly successful engineers and applied mathematicians, but not so many pure mathematicians yet.”

Migliore graduated from Haverford College with a bachelor’s degree in mathematics and earned his doctorate from Brown University in 1983. He joined the University in 1989 and reached full professorship in 1994. He served as the associate chair of the Department of Mathematics in 1995–1996 and from 2008–2016. He also served as director of undergraduate studies from 2000–2004.

“Juan has been a highly respected and influential member of our department for thirty years, and of the algebraic geometry community for longer than that. His body of research alone certainly warrants this appointment, but I'd like to mention Juan is also a fantastic, award winning teacher,” said Richard Hind, professor and chair in the Department of Mathematics.

In 2018 he received the Father James L. Shilts, C.S.C./Doris and Gene Leonard Teaching Award in the College of Science, an honor he said is a career highlight.

“On the research side, I've been enormously blessed over my career to have met a lot of really smart people from around the world who became both close friends and collaborators,” he said. “The aspect of my research activities that I would highlight is the collaborative side—being able to bat ideas around in a relaxed and lively way with so many friends has been (and continues to be) the most valuable and the most enjoyable part of my work, and it is a crucial component of my research

Originally published by Deanna Csomo Ferrell at science.nd.edu on June 20, 2022.