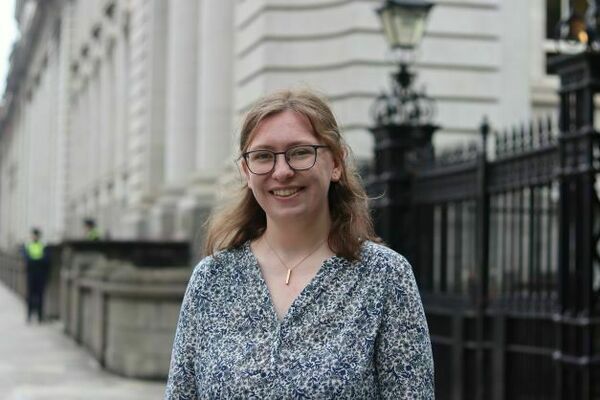 Abigail Keaney ’24 had an ideal upbringing for a student with a focus on the interwoven history and politics of Ireland, Britain, and the United States.

Born in Florida to academic parents who met in graduate school while studying history in London, her parents and grandparents variously called the cities of Dublin, Liverpool, and Belfast home. Abigail grew up primarily in London, but visited Ireland and the US frequently during her childhood and adolescence, enabling her to become familiar with the culture of each country.

She chose to study at Notre Dame and quickly found her way to majoring in Political Science, with a supplementary Global Studies major and an Irish studies concentration.

“Professor Brian Ó Conchubhair’s (Associate Professor of Irish Language and Literature and Keough-Naughton Institute faculty fellow) first-year University Seminar on ‘Renewing the Republic’ fascinated me and drew me in ,” Abigail says. "In one unit, we studied the speeches of Presidents Barack Obama and Michael D. Higgins. In another, we compared the American and Irish responses to the same global issues, such as COVID-19, climate change, and international development."

Abigail applied for the Kellogg Institute for International Studies' International Scholars Program and, once selected, was paired with Professor Ó Conchubhair. Since sophomore year, she has supported his research on the historic and contemporary linguistic and cultural politics of Northern Ireland. Within these spheres, emphases have included conflict resolution, the challenges presented by potential reunification, and conceptions of a post-Brexit Northern Ireland.

“For me, everything interesting at Notre Dame comes out of the Keough School,” Abigail says.

In a further example of that, last summer, through Notre Dame’s Irish Internship Program, she interned on a joint project of the Keough-Naughton Institute and the Royal Irish Academy: Analysing and Researching Ireland North and South (ARINS).  Through publications, podcasts, projects, and events, the goal of ARINS is to provide authoritative, independent, and non-partisan analysis and research on constitutional, institutional, and policy options for Ireland, north and south, in a post-Brexit context.

“Some of my assignments included constructing databases of articles on such diverse topics as Islam in Ireland, cross-border crime, Ireland's historic role in international relations, cross-border refugee policies, the writings of John Hume and David Trimble, and the Colombian Truth and Reconciliation Committee,” Abigail recounts. “A particularly fascinating assignment was visiting the University of Oxford to learn about the Quill Project on penning peace and how the Belfast-Good Friday Agreement negotiations might be mapped using its software.”

An additional assignment that was important both academically and personally to Abigail was attending a Shared Island Conference in Derry sponsored by the Irish government—dealing with the issue of identity.

“For my internship, the conference led to further work on analysis of data from the Northern Irish Life and Times Survey regarding a study of national identity in Northern Ireland and how it has changed over time based on factors like age, gender, and religion.”

Personally, the conference ignited Abigail’s own very personal interest in the subject of identity.

“I think about identity all the time,” Abigail says. “I hold three passports—British, American, and Irish. Given my accent, my Britishness is my least contested identity; so, if pressed, I would say that I am British, but with an asterisk. Ultimately, though, I don’t feel fully a citizen of any one of those three countries—whatever ‘citizenship’ and ‘identity’ might mean.

Abigail plans to take her inquiries and investigations further and write her senior thesis on the topic of identity. With Professor Ó Conchubhair as her adviser, she will look at how identities on the island of Ireland have changed over time, mapping these changes to historical events, but also looking at what happens to existing identities when people migrate to new places and are perceived in very different ways.

“While I don’t always feel fully one thing or another,” Abigail reflects, “I am fortunate to feel a sense of belonging in many places, each place bringing out a different part of myself.

“With that being said, I’m interested in what it means to belong, and what it means to be part of a nation—who gets to decide who is or who isn’t allowed to call themselves ‘Irish,’ or ‘British,’ or ‘American,’ for example. Given Ireland’s unique political and historical landscape, the Irish identity is particularly fascinating, all the more so when studied at a school like Notre Dame, full of Irish-Americans and fielding a sports team whose very name evokes a certain image of Irishness, perhaps one of the only schools which asks its students and fans to claim a new national identity.”

As she explores this and other questions, Abigail has most certainly found a place of belonging in Notre Dame's Keough School of Global Affairs.

Originally published by Mary Hendriksen at irishstudies.nd.edu on November 15, 2022.