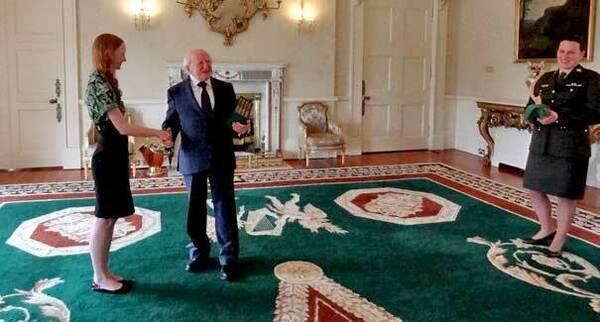 Often it’s the quiet ones who leave indelible impressions. 2013’s foreign language standouts begin with Caitlin Myron, nominated by the Irish Language and Literature’s (IRLL) Director of Undergraduate Studies, Tara McLeod. At the CSLC, we know Myron as the quiet, reserved Irish language tutor. The mild-mannered demeanor of Myron, a senior English major and IRLL minor, belies a dynamic competitor in Irish dance, a passion she’s been perfecting since the age of six.

The Orland Park, IL native, “Caitlín Rua” (“red-haired Caitlin,” as Professor McLeod affectionately refers to Myron) maturely recognizes that the years of Irish dancing and performing have instilled discipline, commitment, and a sense of adventure (and style and flair, of course). Myron’s qualities have created several academic and career opportunities. Currently, she’s pursuing a position as a Fulbright Foreign Language Teaching Assistant in Ireland for a year, and applying to the graduate program in Nua-Ghaeilge (Modern Irish) thereafter.

Myron’s other foreign languages include Spanish and Old English (yes, it’s a foreign language—to most). She has been studying Spanish since fourth grade. Currently in her spare time, she reads Spanish language literature and listens to Spanish pop music (La Oreja de Van Gogh is her favorite). As for Old English, Myron “wanted to dip [her] feet into at least one ‘dead’ language.” Unfortunately, she’s not proficient enough to text in Old English.

Her greatest passion is Irish—all things Irish. It’s been a part of her fabric since she was a toddler, as her grandfather spoke Irish during visits. Her interest in the language was piqued through her years of international Irish dance competitions. “I was intrigued by the unpronounceable-looking Irish words that I came across in the Irish dance world,” she admittedly laughs. (As fluent as she is, she still can’t pronounce Ó Conchubhair.)

At Notre Dame, the IRLL faculty members have been auspicious charms to Myron. Myron has taken Irish I, II and Intermediate Irish with Professor MacLeod, who has been instrumental to Myron’s academic development. Myron describes Professor MacLeod as being a source of inspiration yet having a grounding influence:

“Tara MacLeod [has] provided a disciplined yet supportive environment where I felt comfortable speaking in class and asking for additional guidance with my independent work on the language. She has been an encouraging mentor to me through all my Irish language endeavors and reminds me that learning does not have to be stressful.”

Myron’s endeavors to beef up her Irish language skills include studying and working abroad in Ireland. She studied in the An Ceathrú Rua intensive Irish program and interned with the Irish government.

The gains from these abroad experiences have helped Myron with her senior thesis in the English Honors Concentration on Irish language poet Seán Ó Ríordáin. She researches literary criticism of Seán Ó Ríordáin, one of the most important modernist Irish literary figures of the first half of the 20th century, in original Irish texts. Her interest in Irish literature started with Professor Sarah McKibbens’ course. Of Professor McKibbens, Myron notes:

“Sarah McKibbens’ course on Great Irish Writers ignited my interest in Irish literature. She wants her students to do well, and she challenged me to improve my writing and encouraged me to be more confident and articulate in class. Her passion for her subject is contagious, and she pushes me to work hard and succeed.”

These days, Myron finds as many opportunities as she can to apply and maintain the Irish language in her daily life. She’s a member of the Irish Club and the Irish Dance Team, reads in Irish during Notre Dame masses, including the Notre Dame Dublin Program’s Thanksgiving Mass, writes poetry and short stories in Irish “to exercise [her] grammar and creativity,” and converses with IRLL faculty in Irish. She also attends major Irish language conferences such as Inter-changes: Irish Language Learning and Teaching Conference in 2011, and VIA 2012: Irish Drama / Drámaíocht na hÉireann.

To anyone new to foreign languages, Myron wisely advises focusing on the communication, understanding, and personalizing the process:

“Don’t (always) be a perfectionist. When speaking, remember that language is fluid and mainly about communication, while writing is the place to aspire for perfect grammar. Once I realized that people are more interested in what I can say than in what I can’t say, I was able to focus on the relationships I was building through the language rather than on my insecurities. Play around with language and make it your own.”

“Differences in language and culture [should be] seen as opportunities to communicate and to experience life in different ways,” Myron expresses. Myron has taken this view to heart in her own life. Her international jaunts include Morocco, Belgium, Spain, and England just to name a few. In high school, Myron traveled to Costa Rica with her classmates for cross-cultural learning and exchange. She was able to use Spanish in a completely unfamiliar territory.

Irish dance, however, opened the world to her. She competed from age six to eighteen and has competed in Ireland, Canada, and throughout the states.

At Notre Dame, Myron has taken advantage of the University’s study abroad opportunities and secured scholarships for other international programs. She studied for a year at the prestigious Trinity College Dublin. A major component of the college is learner responsibility and agency. Myron had to be more self-sufficient for her own learning and growth. While there, she took steps “to be more proactive, independent and self-motivated and directed,” she explains. One of these steps was joining the college’s Irish language and culture group, Cumann na Gaelige, and participating in events such as Oireachtas na Samhna, the Irish Culture Festival.

After Trinity College, Myron remained in Ireland and completed the highest-level Irish language course in An Ceathrú Rua in the Galway Gaeltacht through the Sweetman Scholarship. She lived with a host family during the An Ceathrú Rua program, which presented Myron with daily opportunities to interact in Irish with the “host mom” and locals in the area.

The height of Myron’s Irish tour de force was a seven-week internship in Belfast managing educational resources with ÁIS Book Distribution and Foras na Gaeilge through the government’s Department of Education, which promotes the language. Myron secured the internship through the Keough Naughton Dublin Internship Programme. The internship turned out to be more than she bargained for: “The internship was the first time that I began and maintained professional relationships and personal friendships exclusively through Irish,” Myron reflects.

Among other highlights of her internship, Myron helped facilitate meetings with the Young Ambassador Program, met representatives of Europe’s minority language radio stations, and was interviewed for an article by Saol, an online Irish language magazine. Myron’s internship culminated with presenting, in Irish, a book to the President of Ireland, Michael D. Higgins.

Myron has demonstrated a remediating impact in her local communities. She actively participated in her church choir and was an active member of the local chapter of Habitat for Humanity in Illinois.

At Notre Dame, Myron has volunteered with the TRiO Upward Bound program, tutoring low-income grade school students. She also participates in several other volunteer projects coordinated by the University around the Michiana area. Her service work doesn’t stop in the states. In Dublin, she volunteered with the organization Fighting Words, “a creative writing center that hosts story-writing field trips for primary school students,” Myron fondly says.

Myron makes the most of her time at Notre Dame, seeking academic and professional opportunities and turning them into an impressive and practical coterie of achievements. She understands the long-term values of Notre Dame’s programs. For example, during the Fall 2012 Break, she participated in the Senior Thesis Camp instead of traveling with her friends. During the Senior Thesis Camp, she set her own academic bar higher with intensive research of original Irish texts and refining her thesis.

Myron’s tapestry of accomplishments and cross-cultural experiences have won the respect and admiration of the faculty in IRLL. Professor MacLeod says of Myron:

As Myron forges ahead towards a career in Irish, we wish her an Irish Blessing:

“May the road rise to meet you,
May the wind be always at your back.
May the sun shine warm upon your face,
The rains fall soft upon your fields,
And until we meet again,
May God hold you in the palm of his hand.”