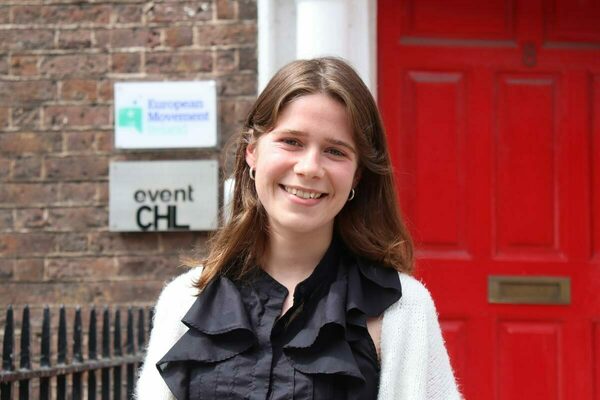 Ciara Fitter ’23 is a major in political science and global affairs with a concentration in transnational European studies. In summer 2022, she received a grant to participate in the Notre Dame Irish Internship Program, which is supported by the Nanovic Institute and facilitated by the Notre Dame Dublin Global Gateway. This brought Ciara to Dublin for a placement with European Movement Ireland.

I have always had a personal connection to Ireland: my dad was born in Dublin and spent his earliest years in Galway before moving to Canada. This connection instilled in me a particular drive to understand and belong to a culture that is only partly mine — a desire that manifested itself in my heavy consumption of Irish media, from watching the comedies “Derry Girls” and “Father Ted” to reading Seamus Heaney’s bog poems and Colm Tobín’s novel Brooklyn. My short visits to Ireland and pop culture and literary glimpses of its culture only deepened my wish to spend more time there. So when I heard about internship opportunities at the Notre Dame Dublin Global Gateway, I applied right away.

After completing two interviews and a myriad of paperwork, I was offered an internship with European Movement Ireland (EMI), a non-governmental organization (NGO) that works to deepen Irish citizens’ and institutions’ understanding of their role in Europe and in the European Union (EU) as a whole. This placement connected with my involvement with the Nanovic Institute over the previous year, first as a student assistant on the research project “The Road to Europe: Exploring European Union Candidacy in the Western Balkans” and then as a member of the Midwest Model EU team that, after several weeks of preparation, traveled to Indiana University to “represent” Ireland and Poland at a mock summit.

These experiences taught me how overwhelming it can be to build knowledge about institutions, values, and challenges within the EU. Simple and reliable resources, such as EMI’s publications and events, were essential to the success of my research and Model EU participation, so I wanted to pay the favor forward and contribute to the organization’s work.

During my time at EMI, I conducted research for articles in production, crafted Twitter threads on the most topical issues, such as Denmark’s abolition of its defense opt-out and European support for sanctions on Russia, and summarized EU press releases for internal use. These responsibilities may seem unconnected, but like many small organizations, every employee works on diverse tasks that stray from their official job title. This, in addition to the dynamic nature of European politics and current events, meant that no two days in the office were the same. Before this experience, I had been uncertain about my career path, but by allowing me to contribute to a diverse array of projects, EMI provided me with the opportunity to explore different professional interests and skills.

Despite holding an Irish passport and visiting Ireland four previous times, I have never felt more American than during this summer. But, I embraced this feeling of foreignness. One of my central motivations for working in Ireland was a desire to apply my abstract knowledge of EU institutions to an actual European setting. Feeling like an outsider proved to me how necessary it is to go abroad and further your understanding of issues that you read about or study in the classroom.

Everyday interactions with my Irish coworkers played a large role in this journey: they took it upon themselves to give me an “education” in Irish music, from the more traditional “The Streets of New York” by the Wolfe Tones to millennial school dance classics like The Corrs’ “Breathless.” Perhaps unintentionally, they also provided me with insights into what it means to be Irish and European. During our lunch breaks, they would ask me difficult questions about politics and religion from which many Americans would shy away. Within my first two weeks at EMI, the tragic Uvalde shooting and a mass shooting in my hometown of Tulsa took place. My co-workers respectfully asked me about the gun-control movement and its opposition, gun culture, and what it means to have the right to bear arms. They were not looking to debate but to understand the issues and to challenge their own perspectives. This willingness to openly discuss and debate difficult issues reflects Ireland’s political culture of holding a referendum to make major decisions on such issues as gay marriage and abortion. This system has also given Irish citizens the opportunity to change their minds. In 2002, Irish voters reversed the decision they had made by referendum one year earlier and approved the passage of the Treaty of Nice, an agreement that reformed the institutional structure of the EU. All of these conversations and encounters — the seemingly frivolous and the politically charged — came together to give me a fuller picture of Ireland and its people.

Outside of being able to better grasp the culture and history that informs Ireland’s political sphere, being in the country meant being where European politics were happening: I traveled to Galway to talk to two Irish Members of the European Parliament at a youth conference, met the Czech ambassador to Ireland, and participated in the Committee of the Regions event. Attending these events with people who are passionate about the same issues gave me a sense of validation about my pursuit of European studies and inspired me to keep learning more.

My internship at EMI brought me to Ireland to support the organization’s mission of promoting knowledge and information about the EU to others. In the process, I was able to greatly deepen my own understanding of what it means to be European.

For any students who plan to visit Ireland, here is a short list of dos and don’ts:

Originally published by Ciara Fitter at nanovicnavigator.nd.edu on September 19, 2022.