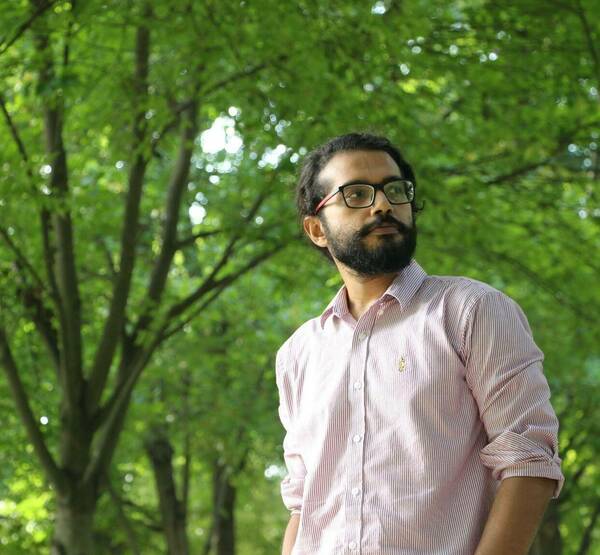 Ahmed Shams has recently joined the Center for the Study of Languages and Cultures (CSLC) at the University of Notre Dame (ND) as a visiting scholar from Notre Dame University Bangladesh (NDUB). Over the next year, Shams will support international graduate students in the English for Academic Purposes (EAP) program, teach classes, and conduct workshops. He will learn about best practices in teaching and conduct research in language learning and teaching. I had the pleasure of meeting Shams to discuss his role at Notre Dame, his impressive career, and his spiritual philosophy.

Shams completed his undergraduate degree in the Department of English at the University of Dhaka, Bangladesh in 2008. He was always passionate about pursuing performing arts but had not had the chance to explore this passion in childhood. “I aspired to learn the techniques of many different art forms not to be an artist precisely, but to be able to appreciate the process of making art. English literature served as an excellent gateway into broader forms.” To explore these techniques, Shams apprenticed at a local theater and learned how to act, write, direct, and produce plays. He completed a course on film-making from Bangladesh Film Institute in Dhaka within the first year of his undergraduate studies. He also published his first poetry book during that time entitled, Theo 101. Shams’ early poetry focuses on theological encounters along with socio-political issues. Though his poetic stylings belong to his own experience, his influences also include the works of Rumi, Syed Shamsul Haque, Lalon, Samuel Beckett, Harold Pinter, Ted Hughes, and many more.

Before pursuing a master’s degree, Shams worked as a full-time journalist for the Bangladeshi national newspaper, The Daily Observer. He wrote weekly columns about various socio-political issues, including education, multiculturalism, gender issues, peace, and tolerance. When reflecting on his time as a journalist, Shams stated that it played an immense role in boosting his career. Through journalism, he networked with multiple professional personas, learned how to manage pressure, and be versatile and adaptive in any work environment. Shams also taught English at St. Joseph Higher Secondary School in the morning before his shift started at his newspaper office.

Shams received his master’s degree in English Literature from the University of Dhaka in 2015 and obtained a position at NDUB. He initially worked as a lecturer and was eventually promoted to Assistant Professor. Shams’ enthusiasm for teaching emphasizes that teaching is “going that extra mile” as it’s much more than lecturing. He explained his teaching philosophy with a metaphor. “Teaching is more like the role of a tour guide. Tourists take ownership of their experience while the tour guide takes a passive role and always stays behind the scenes sailing the boat to help them achieve their goals.” Shams affirms that his strategies make his students empathetic leaders with a self-understanding who solve problems throughout life. He also noted that while teaching, he consulted for various corporations and NGOs on projects like publications and documentary films.

Discussing Shams’ accomplishments led to a discussion of his teaching philosophy, which is closely connected to his spirituality. He reflected on his poetry, and he said that poetry is much more expansive than what we typically think it to be”, saying “whatever we do with love, whatever we can contribute to this universe, is poetry”. He continued, “Poetry is relational. It is all about what we can give to our surroundings, and how we communicate with the world around us.” In this light, it is understandable that Shams’ recent works are mostly eco-centric. Shams tries to understand the symbiotic relationship of human and non-human energies in this universe and breaks down the various power dynamics and status quo found in that relationship. To do this, Shams’ takes the point of view of something common, like a blade of grass, and tries to understand its relationship with the larger ecosystem and humanity. He concentrates on giving voice to organisms that have often been unheard of, hoping to give the reader a new perspective on their role in their environment. Shams’ stated that his spirituality “should not be confused with religion, but rather viewed as how someone approaches one’s connection with one’s existence and surroundings.” Now while teaching, Shams is quick to emphasize that when meeting with his students, he seeks to understand their issues from their perspective while being cognizant of the role he plays in their education. This helps Shams create an open and welcoming environment for his students, maximizing their ability to learn.

When I finally asked him to pick out one experience throughout his storied career that helped shape him, his immediate response was, “Does it have to be in my career?” Despite his many achievements, his career is a small part of his life in terms of character formation. He added that his family members helped more to shape him into the person he is today.

The CSLC is proud to have Shams share his knowledge and philosophy with students here at Notre Dame. It fulfills the goal of the partnership between ND and NDUB in helping to create meaningful scholarly connections that can help both schools to enrich language proficiency and best practices in teaching languages. As part of this collaboration, Shams will be in South Bend as a Visiting Scholar through Spring 2022, before returning to Bangladesh and teaching at NDUB. He is working closely with EAP Professor Lisa Oglesbee, who teaches EAP graduate courses and the TESOL minor program for undergraduate studies. Moreover, he is also being mentored by Maureen Hogan, Instructional Designer and Technologist at CSLC, and Alessia Blad-Miller, the Director of CSLC.