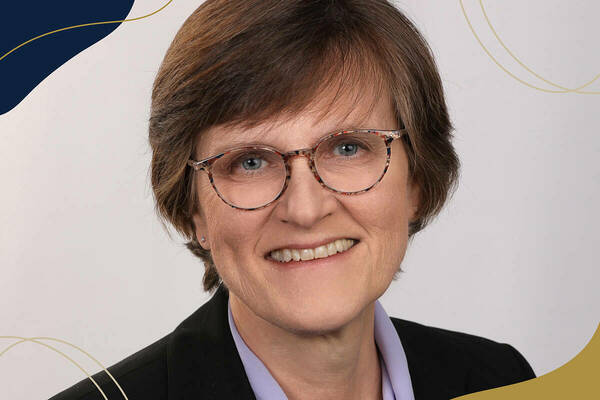 To celebrate the 50th anniversary of the co-education of women at Notre Dame, the College of Arts & Letters is publishing a series of features on alumnae who studied the arts, humanities, or social sciences, then followed a wide range of career paths after graduation. Look for more profiles soon on how a liberal arts education helped these women discern not just what they wanted to do — but who they wanted to be.

Also in this series

Four years later, that interest had blossomed into a curiosity about the rest of the world — and a calling to live out her values in the service of others.

Now an executive with the global office of Ronald McDonald House Charities, Laguatan’s time at Notre Dame allowed her to discover her place and purpose in the world, one defined by helping others and offering dignity to those in need at home and abroad.

“A global mindset is really something I cultivated and felt affirmed in at Notre Dame,” said Laguatan, who majored in economics and French. “It was such an amazing experience to come from a small Catholic high school to Notre Dame at age 18 and meet people from all over and be exposed to all kinds of people and thoughts. For me, the Notre Dame experience was really about opening up to the world.”

‘You learn to love learning’

A native of Flint, Michigan, Laguatan had studied French in high school, and when looking at colleges, Notre Dame’s yearlong study abroad program in France caught her attention.

Once admitted, she declared a French major and then spent the entirety of her sophomore year studying and living with a host family in Angers. Being immersed in a foreign country and traveling around Europe sparked her interest in other cultures and ways of living.

Wanting to expand her studies beyond French, Laguatan explored a range of classes within Arts and Letters. She was drawn toward the field of business but was passionate about the reading, writing, and speaking skills associated with liberal arts programs. Laguatan decided to pursue a second major in economics and immediately saw many ways in which her two interests overlapped.

“For me, developing a global mindset included the French language and living in France, but also taking classes about modern political theory and macroeconomics and issues of justice,” said Laguatan, whose maiden name is Murphy. “You start putting those pieces together, and it makes you even more interested in the rest of the world and how we interact and how we treat one another. I really feel like Arts and Letters was all about teaching you to be a thinker and reflector.”

After graduating, she had a brief stint working for General Motors in her hometown, then took a position teaching French and government at her high school alma mater. Three years later, she decided being in the classroom wasn’t the career she wanted, so she enrolled in a political science master’s degree program at Marquette University.

“I’ve always had a love of learning, which was also a big part of my Notre Dame experience,” Laguatan said. “At Notre Dame, you learn to love learning and always learning more. I had decided that I would love to learn more about the bigger picture, and political science seemed like a great fit.”

“A global mindset is really something I cultivated and felt affirmed in at Notre Dame. ... For me, the Notre Dame experience was really about opening up to the world.”

Yet, Laguatan kept feeling a call toward service. She had been a part of service experiences through the Center for Social Concerns, and the possibility of pursuing a mission had been on her mind since graduation. Visiting her college roommate, a Holy Cross associate in Chile at the time, gave her the final push she needed.

She joined the Maryknoll Lay Missioners, and after six months of training that included a two-month stay in Bolivia to learn Spanish, Laguatan moved to a poor neighborhood on the outskirts of Santiago, Chile. There, she worked with a parish community for four years organizing and supporting educational opportunities for women in the parish.

“There’s a lot of isolation and machismo, and women have a hard life there, so the classes were a way for them to get out, to connect with others, to learn a different trade, and earn money,” Laguatan said. “I was able to use my background to train the women to be teachers and, in doing so, helped create a community for them. It was an amazing time in my life.”

‘Life is a great little story’

Her years in Chile affirmed her desire to continue her career in the nonprofit sector, and after returning to the United States, she began working for Ronald McDonald House Charities, an organization that supports families with ill or injured children, primarily by providing housing to the parents and relatives of children who are in the hospital or outpatient treatment.

Laguatan credits her Spanish skills with helping her land a job as a house administrator in Cleveland, where she worked for four years before moving to Chicago in 1999 to run a Ronald McDonald House in Hyde Park.

“It’s a community effort trying to advocate for people who are vulnerable and provide a great home away from home,” she said. “It’s a family-like environment filled with volunteers, and I just find it really inspiring. Anyone with a sick child is welcome at a Ronald McDonald House — it’s the way I wished the world worked everywhere, and it inspires me everyday.”

Laguatan — who now lives in Lisle, Illinois, with her husband, Richard, and 13-year-old son, Daniel — has now been with Ronald McDonald House Charities for about 25 years, moving up to senior director and vice president positions in the Chicagoland and Northwest Indiana region before starting her current role directing field operations across the Americas in May 2021. She oversees nearly 160 sites throughout North and South America, ensuring they are getting the support and resources necessary to be successful charities helping children and families in need.

In her daily communications with the many chapters around the world, Laguatan regularly relies on the abilities she developed at Notre Dame.

“Arts and Letters was so great at teaching writing, communication, and analytical skills,” she said. “With any topic, you end up having to communicate and analyze and put together an argument, and I felt really well guided in that area. I firmly believe I have really strong writing and communication skills because of that.”

Time and time again, Laguatan found that her liberal arts education had also helped her hone a mentality that prepared her for the twists and turns of a career that was unpredictable, but always full of purpose.

“Life is a great little story,” Laguatan said. “Notre Dame teaches you to have this reflective nature about where you fit into the world. Trying to figure out where that was for me took a while, but then I fell into it — the French, the service, and living by my values.

“My years at Notre Dame helped me formulate that bigger picture, and it has guided my career ever since.”

“Notre Dame teaches you to have this reflective nature about where you fit into the world. Trying to figure out where that was for me took a while, but then I fell into it. ... My years at Notre Dame helped me formulate that bigger picture, and it has guided my career ever since.”

Originally published by Sophia Lauber at al.nd.edu on March 15, 2022.