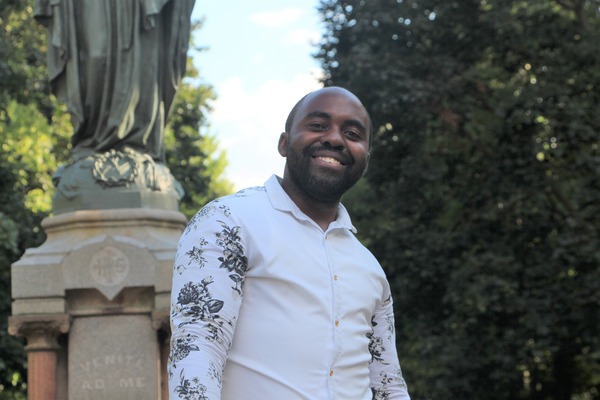 There is always a debate in language teaching and learning on whether or not a language teacher should be a native speaker teacher of the language or a non-native teacher speaker but there is no debate that the teacher should be a teacher.  Clement Kigelulye is a teacher.  Arriving in the US in late August as part of a group Fulbright Language Teaching Assistants (FLTA), Clement specializes in teaching linguistics and Swahili in his home country, Tanzania.

After learning about Fulbright through YouTube, Clement immediately recognized the amazing opportunity. He quickly became excited to become an ambassador of his culture and language for Americans, and he is honored that he gets to share his language with students. He also knew that Fulbright would be an amazing opportunity to travel and learn new things from a new culture. Before applying for a Fulbright position, Clement taught Swahili and English in a secondary school in Dodoma. While the official language of Tanzania is Swahili, all advanced education courses are taught in English. This makes his bilingualism highly valuable.

Outside of traditional school teaching, Clement also taught Swahili or English to nonnatives via Zoom. When he was not teaching, Clement spent time volunteering for the Grace Mission Foundation. Through this group, Clement visited local schools to educate children about social issues throughout the country. The Grace Mission Foundation also provides support and resources to help Tanzanians start and maintain their own business. Clement was born and raised in Dodoma and describes the many beautiful tourist attractions found in the region, including Mount Kilimanjaro and Lake Victoria. He enthusiastically speaks of the rich history of Swahili and its influence on the formation of Tanzania as a nation. In our interview, Clement described how Swahili was instituted as the official language of Tanzania in 1965, and how it united the many tribes of the region into one group. Since there are 120 different tribes in Tanzania, Swahili has helped to gracefully pull together those tribes to form Tanzania.

As an FLTA, Clement teaches three levels of Swahili courses while enrolled in two classes in academic writing and English teaching methods. Teaching in the U.S. has been an adjustment for Clement, as he immediately noticed that students are given more freedom and take more ownership over their education than what he is used to. Students are more eager to engage with the professor and challenge what is being taught. While different, Clement appreciates this method, as students become more active in class and learn more.

Clement likened language education to a key. He said, “It opens doors. In learning a new language, you can meet new people and gain new opportunities. Furthermore, you can explore things from a new angle and learn a new culture, learning how people around the globe do similar things but in different ways.” Clement knows that language learning is not always easy, but he had reassuring words for those who may be struggling or are cautious about learning a new language. “Focus on incremental progress day after day and do not dwell on failure.” He also noted that “Technology has revolutionized the way we learn languages.” He noticed the abundance of resources available not just at Notre Dame through the CSLC and the Hesburgh library,  but also through online resources. These resources are a great way to supplement language learning. Clement believes strongly that any language can be learned given enough patience and practice.

After completing his time here, Clement is excited to return back to Tanzania and resume teaching. He believes strongly in education for the sake of community development, and he is hopeful that the teaching methods he learns here will enable greater success in his community in Tanzania. He hopes to continue to teach as many students as possible in his home community, helping students achieve their highest potential.