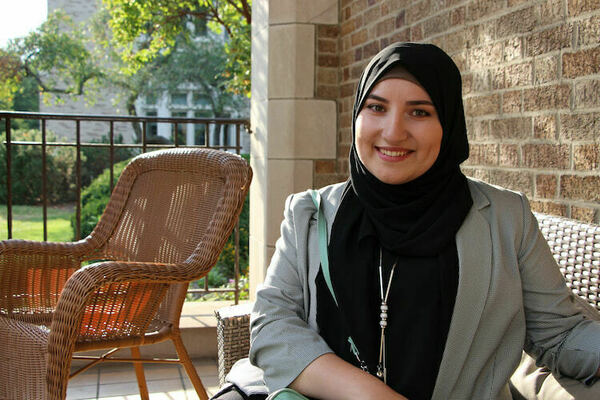 Lebanon has been called a magical place, with a culture that is one of the most diverse in the Arabic world. Slightly smaller than the state of Connecticut, Lebanon is filled with beautiful architecture, mouth-watering cuisine, and a diverse population. It exists at the intersection of the Persian, Roman, Ottoman, and French cultures, which all contribute to forming the unique Lebanese identity. While the mention of Lebanon may bring images of the misunderstood city of Beirut,  Arabic FLTA Jinan Abou Ali hails from a much smaller town named El Manara, a place that has no shortage of character. Jinan described her hometown as a place where everybody knows their neighbors, community bonds are strong, and the smell of her stuffed grape leaves (a beloved recipe of her grandmother) wafts through the air.

Jinan is one of five children, with parents who are extremely encouraging for their children to chase their dreams. During our interview, she recalled the daily lunches in El Manara where her entire family would clear time in their schedule to eat together. Growing up, Jinan attended the National American School, where she was educated through an American-inspired curriculum completely in English. This early exposure to the English language helped Jinan determine her future quite quickly. She knew she wanted to work as an English educator when she was in third grade. As she progressed through grade school, she was inspired by English teachers who encouraged her to follow her passion for the language.

Upon completion of the National American School, Jinan enrolled in the Lebanese University as an English Literature major. Through her higher-level education, she was exposed to a multitude of European and American authors and said that her studies were a mirror to that of many literature majors in the United States. She began to teach English before graduating, offering the wisdom and expertise she had spent over a decade gathering to her students. She was exposed to the Fulbright scholarship opportunity during her years at the Lebanese University but was too busy balancing school and teaching to apply. However, upon graduation, she jumped at the opportunity to apply for the Fulbright Program for Foreign Language Teaching Assistants. She was accepted and was placed with the University of Notre Dame to assist in teaching Arabic in the Program in Arabic and Middle Eastern Studies.

Jinan fills her days with teaching speaking classes, taking classes in American Literature, and tutoring students in Arabic at the Center for the Study of Languages and Cultures (CSLC). In her classes, Jinan works hard to challenge her students to speak Arabic, rather than just focusing on reading and grammar. Speaking helps remind students why they were passionate to study language in the first place, and she believes that it is a welcomed break from grammar drills. This is her first experience teaching Arabic instead of English and Jinan said that she has had to make adjustments to her methods of teaching, but it has been a refreshing change. She said that it is exciting to see students engaged and enthusiastically learning her native language. With her first taste of America here at Notre Dame, Jinan is also excited to experience more of what the U.S. has to offer. She has plans to travel to Chicago, Michigan, Washington, DC, and also to visit her sister in Delaware.

While Jinan recognizes the hardships that Lebanon is currently experiencing, she is extremely grateful for the opportunity that Fulbright provides. Economically, Lebanon is experiencing intense and historical hardship, but Jinan was quick to emphasize her country’s ingenuity and motivation, and that there is so much hope for the future. She thoughtfully explained her dreams of returning to Lebanon with the skills she is acquiring at Notre Dame to help lift up her community. Jinan spoke about her country with pride and faith - pride in the people of Lebanon and faith in the future.

The Program for Arabic and Middle Eastern Studies offers minors and majors, and can help students immerse themselves in the language, cultures, and history of the Middle East. The CSLC offers tutoring in the Arabic language, and if you want to test the waters you can download the Mango app for free!

The CSLC is dedicated to the advancement of linguistic proficiency and cultural awareness for students, staff, faculty, and spouses in all languages across the Notre Dame community. If you would like to learn more about studying languages and cultures, Fulbright programs for Notre Dame Students, or cultural events sponsored by the many groups at Notre Dame, visit the CSLC website, or call (574) 631-5881.