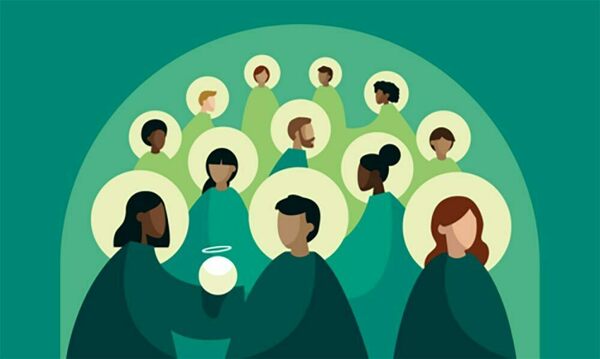 Like a lot of cradle-born Catholics, Alex Jones (BBA ’15) was falling away from his faith under the pressures of young adulthood and a demanding job after graduation.

Feeling a vague sense of emptiness and anxiety, he began to meditate to find inner peace with the help of a popular phone-based app called Headspace. But he still didn’t find what he was looking for.

The meditation methods felt either agnostic or tinged with Eastern mysticism, so he called Rev. Peter McCormick, C.S.C., his former rector from Keough Hall. Jones asked if the Catholic Church had anything to offer along these lines.

“Fr. Pete laughed and said I must have slept through some classes,” Jones recalled of the conversation. “He said, ‘We’ve been doing this stuff for 2,000 years.’”

Jones decided to try Lectio Divina, a contemplative prayer method that involves closely reading a short Scripture passage repeatedly until one phrase stands out. Opening at random to the Sermon on the Mount, he honed in on the phrase, “Hallowed be thy name.”

A few years later, Jones and classmates Alessandro DiSanto (BBA ’15) and Erich Kerekes (ND ’15) quit lucrative jobs to start Hallow, a prayer and meditation program that has quickly grown into the No. 1 Catholic app in the world. Downloaded 3.5 million times across the globe, Hallow users have prayed about 100 million prayers with the app since the company was founded at the end of 2018.

Hallow means “to make holy,” and that’s the goal that the three co-founders set out to achieve – an unexpected mission for some lapsed Catholics that led to a transformation of their own faith lives as well.

“I’m one of four kids and if you would ask my mom who would have started a Catholic app, I would have been last on the list by a very long margin,” Jones said. “I would have considered myself agnostic, so it certainly was a surprise. This thing has changed my life. When we shared it with folks, they had powerful experiences, too. Since then, our core goal has been to share this. What can we do to help the most people pray?”

Hallow recently announced a partnership to make the app available to all students, staff and faculty at the founders’ alma mater. Lila Mangino, a sophomore from Pennsylvania, said she’s glad the Notre Dame community will have access to an app she has used since her father showed it to her last December. She likes to listen to 20-minute homilies by Father Mike Schmitz when she’s working out or walking across campus.

“We’re so busy and we get really stressed and focused sometimes on achieving things,” Mangino said of herself and her classmates. “We need to focus on ourselves and our relationship with God and just our own spiritual health, and I think this is something that’s really easily accessible.”

At Notre Dame, Jones lived down the hall in Keough from DiSanto. They were fast friends since their freshman year, both serving as the co-best man in the other’s wedding, along with Bryan Enriquez (ND ’15), another early team member. Their roommates also became part of the initial team that started Hallow.

None of them followed this path initially. The three founders all worked in Chicago after graduation and pursued typical business careers. Jones, a mechanical engineer with some coding experience, dove into his spiritual journey while he took pre-Cana classes before getting married. He built a simple prototype before going off to business school at Stanford.

Kerekes, who lived in a different dorm, got to know Jones at a company retreat when they worked together as consultants at McKinsey, a worldwide giant. He had moved to San Francisco to work with startups and was in line for a promotion to partner.

When Jones asked him to join Hallow in mid-2018, there was no app and no team. In true consultant fashion, Kerekes drew up a pros and cons list, which clearly pointed to McKinsey. But he also tried a prayer of discernment.

“I was hit over the head with all of the things that had lined up in my life perfectly to bring me to that moment,” Kerekes wrote in a Hallow blog post about quitting his job and moving across the country. “It was crazy. So crazy in fact, I had to write an entire other blog post just to capture this revelation and the clarity that it brought me.”

DiSanto, a finance and economics double major, was involved in business and investing clubs at Notre Dame, as was Jones. DiSanto interned at Goldman Sachs in New York before working there a few years and going into private equity in Chicago. Part of a big Italian and Catholic family, his journey was less about a loss of faith. He said he boxed his relationship with God into Sundays while spending up to 100 hours a week working.

“For me, it was the discernment tool of trying to stop and ask — not what do I want with my career, but what might God be calling me to?” DiSanto said. “The rest of the team as well, in our own unique ways, had revelatory experiences. Then ultimately, we decided to make those experiences more accessible — in a modern, mobile, digital way — in the same way that Headspace and Calm have done for secular meditation, but for Catholic prayer and meditation.”

The founders researched different Catholic prayer and meditation traditions and recorded a few scripts to try with family and friends. The impact surprised them and provided the encouragement to keep building.

Kerekes and DiSanto decided to partner with Jones and quit their jobs in late summer of 2018. DiSanto described the decision to leave a career he’d worked toward since sophomore year as “simultaneously the most and least stressful decision ever” because he trusted God’s role in his discernment process. After a Kickstarter campaign to raise money, Hallow was in Apple’s app store by December.

“It was definitely a bit of a jump into the unknown,” Jones said. “I have an incredibly supportive wife, so I was able to make no money at first. We lived in a tiny studio apartment and I drained all of our retirement savings. We figured we might as well give it a shot for a couple of years.”

The co-founders considered creating a nonprofit but instead settled on a structure called a public benefit corporation. Rather than just maximizing shareholder value, Hallow is incorporated in a way that makes its social mission a legal responsibility.

“We wanted to build a really high-quality piece of technology,” Jones said. “It’s really hard to build a great team from places like Google and Facebook if you aren’t structured as a startup that can give away equity to early employees.”

“Morally and theologically, the Pope and the Church are very clear that entrepreneurship when aligned with Catholic social teaching and values can be a tremendous force for good.”

Some content — about 1,000 prayers  — is available for free. The premium version costs $8.99 per month, while an annual subscription costs $59.99, both with a free 14-day trial. Schools get heavy discounts, while religious leaders can access premium content without charge to lead their communities. Though it is Catholic-centered, thousands of users come from other Christian denominations.

The founders brought in several other Notre Dame friends, mostly from Keough Hall. They worked with theological experts as they built out a content platform to launch the startup and hired online designers and sound engineers from Silicon Valley. The app expanded from a few dozen prayers to more than 5,000 sessions built around morning, daily or nighttime prayer.

There are daily Gospel readings and different meditations, including everything from the rosary to Lectio Divina and Gregorian chants. Users can choose from sessions between five and 30 minutes in length with different guides and music. Other areas focus on challenges like addiction, temptation, stress or anxiety.

“Our goal with the app is to help people grow closer in their relationship with God through prayer,” DiSanto said. “It’s about finding what works for you. In theory, we should be able to incorporate prayer into every aspect of life. The content roadmap is around: ‘What is the full range of human experience, and how do we incorporate prayer into that?’”

All three founders said their primary motivation is the response from users – that they didn’t expect to build a living this way. One user said the app brought her back to Mass after 30 years away. Another said the meditation helped her find peace and overcome alcoholism. Jones said they couldn’t believe it when they reached 1,000 users and dreamed of doubling — never even considering millions of downloads.

“Every day, we’re just blown away by what God has been able to do through this thing,” Jones said. “It’s infinitely beyond our wildest expectations.”

Much of Hallow’s growth was possible because the team raised more than $55 million across three rounds of venture capital financing. They differentiated leadership roles: Jones is now CEO, DiSanto is chief commercial officer and Kerekes is chief technology officer.

Lisa Hendey (ND ’85), an author and founder of CatholicMom.com, said she joined the board of advisors because she saw the need as soon as Jones proposed Hallow. She appreciated that they have a good mix of religious advisors but also wanted input from laypersons.

“Not only are they concerned fiscally about doing their due diligence as good stewards of their investors’ money, but they’re also trying to create a tool that will really benefit the church,” Hendey said. “My hope is that they continue to reach people, not only people who have an active prayer journey already, but people who are struggling and need the love that Jesus has to give.”

Headquartered in Chicago, the Hallow team now includes 50 full-time employees. DiSanto said the app grew its usage by a factor of seven in 2020, when people needed new ways to engage their spiritual side.

“I would never say that I’m thankful for COVID,” DiSanto said. “But it presented an opportunity where, I think, we had the ability to help support a lot of people going through some very unique and unexpected challenges.”

He said the app is not meant to replace church, but to make prayer a part of users’ lives outside of those walls. Usage patterns show that traffic is lowest on Sundays, then spikes on Monday and tapers off during the week.

Hallow has created partnerships with well-known Catholics such as actors Mario Lopez, Jim Caviezel and Mark Wahlberg. In conjunction with his movie “Father Stu,” Wahlberg provided Hallow with exclusive content: an introduction and commentary on the real-life boxer-turned-priest, as well as his inspiration’s favorite prayers.

Other recent innovations include adding more languages, prayer communities and personalized recommendations. The languages focused on large Catholic populations, starting with Spanish and Portuguese and progressing to Polish and Tagalog, the native language in the Philippines.

Kerekes said he often thinks about how far they have come in the years since he slept on Jones’ couch and spent all day writing code for the app. “We now have over a billion minutes of prayer prayed through the app,” he said. “It’s a surreal thing, but it really has always felt like we aren’t the ones in the driver’s seat.”

Father Pete McCormick agreed, especially as he remembered the “high jinx and shenanigans” of the founders and early team members when he was their hall rector. He said their success is “a reminder that God has a way of drawing straight with crooked lines.”

“I’m just so proud that they persevered and have created this amazing platform that seemingly is gaining momentum by the day,” Father McCormick said. “It speaks to their resiliency and to the commitment that they have to their own faith.”