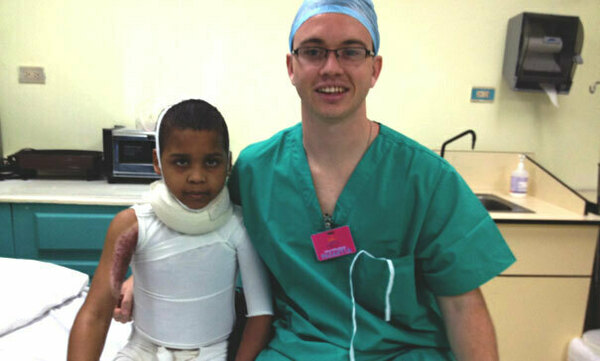 The CSLC brings in an extremely diverse and dedicated group of students, but this month’s spotlight truly highlights the international zeal and global passions of Notre Dame undergraduates. Farrell Sheehan is a Sophomore Theology & Pre-medicine major with a minor in Brazilian and Portuguese Studies who doesn’t believe in the term “limits.” A Hesburgh-Yusko scholar from Rockville, Maryland, Farrell was nominated by Professor Sandra Teixeira of the Brazilian Department for his passion for all things Portuguese, as well as for his experience learning, serving, and working in not just one but three Latin American countries.

Sheehan spent most of high school becoming conversational in Spanish, claiming he was “able to use it every day to listen to all the people speaking Spanish on the city bus ride home from school.” He has been able to use those skills in both Chile and the Dominican Republic, doing research and an internship, respectively.

Sheehan’s Portuguese interest stems from a home neighborhood packed with Brazilian military officials (and his Brazilian girlfriend). He chose to learn the language when he came to Notre Dame out of pure interest for the language and the culture, but fell in love with the program after enrolling in Professor Sandra Teixeira’s Portuguese class because of how “engaging and genuine” she is as a teacher. Professor Teixeira, in turn, has taken notice of Sheehan’s talents. Of Sheehan, Professor Teixeira says he “is a student interested in learning foreign languages with the purpose to make a difference by better understanding different cultures, societies and diversity.”

Today Sheehan maintains the use of both Portuguese and Spanish in much of his research and in his Portuguese classes. Sheehan’s key piece of advice for learning a language is to immerse yourself in real language: have a conversation with a native speaker, find a volunteer activity in your language, and read the news or watch popular video clips to immerse yourself in language and culture.

Sheehan has already spent a significant amount of time working and learning abroad, especially for someone who will not enroll in a semester abroad due to his academic requirements. For Sheehan, breaks are a time to engage in experiential learning; he has spent midterm, Christmas, and summer breaks abroad doing research in Chile, Brazil, and the Dominican Republic. In Chile he worked with his professor interviewing other professors and priests to learn about the dynamic between the Church and State in Chile. While in Brazil over winter break Sheehan spent two weeks comparing private, public, and military health systems, something he claims “has been a great motivation” for him to take his language studies more seriously.

The truly defining international experience for Sheehan came from his Hesburgh-Yusko summer in the Dominican Republic, where he spent six weeks doing research in a burn clinic and volunteering in the emergency room of a hospital in the city of Santiago de los Caballeros. Before traveling, Sheehan had been debating whether or not he wanted to go into the medical field or into finance and business. However, after spending a summer working in a burn unit and an emergency room, Sheenan knew medicine was what he wanted to do. Seeing doctors on the ground floor and interacting with patients further invigorated his passion for medicine. In the Dominican Republic, he learned that medical problems are often ingrained in the culture and require larger fixes than simply an outpatient approach. Seeing two to three patients sharing one hospital bed because of lack of resources, while experiencing the feeling of really helping people and making a difference changed his life--and his career trajectory.

Sheehan’s life at Notre Dame as a student of faith, medicine, and all things Brazilian has been intense, but he has had countless mentors here to help him through his journey. One of these such mentors has been Professor Sandra Teixeira of the Brazilian Studies department. Described as one of the most genuine, helpful, passionate, and caring teachers, Professor Teixeira has practically raised the Portuguese department, and is one of the reasons Sheehan has been inspired to stick with the language for so long.

Unlike many undergraduate students, Sheehan does not spend his weekdays pulling all-nighter study sessions: he rises at 6am and does what he can to stay ahead in classes, and is therefore able to enjoy a more relaxed schedule with his studies, his community, and most importantly, his friends. When he isn’t speaking Portuguese and planning to save developing Latin America, Farrell spends his time teaching catechism to grade-schoolers on the weekends; for much of last year he taught English as a New Language through Catholic Charities.

Sheehan’s time in the Dominican Republic cemented his desire to go into the medical field, but he aspires to so much more: he wants to make a difference on a global scale. While he claims that if he could go anywhere in the world right now, it would be to Rome to see the election of the new Pope, he knows he wants to continue working in Latin America. He is especially interested in Brazil and aiding in the development the holistic, community-based components of medicine there. He knows that serious, systemic health care problems can’t be solved easily since they are often ingrained in the culture, but he also knows from experience how genuinely welcoming and compassionate the cultures that suffer from these problems can be. He offers this wisdom regarding living in a global society: “Americans need to be more open to bringing new people into their circle of friends.” Sheehan has certainly opened his circle of friends to the world, which has surely defined his future.