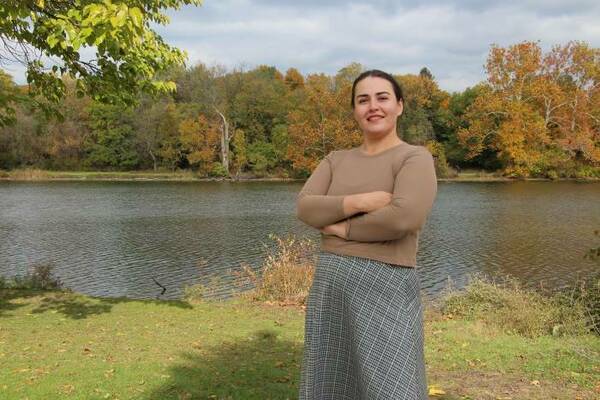 The Russian soul, coined by Nikolai Gogol in 1842, is still used today to describe certain character traits that are unique to the Russian people. In his novel, Dead Souls (Мёртвые души), Gogol describes the travels of Pavel Ivanovich Chichikov and the people he encounters. It is through this novel that the world began to understand the depth of the Russian spirit. Sabina Iusupova, a Fulbright Language Teaching Assistant from Russia, continues to share that depth of soul as she brings her language, history and culture in her travels around the world. And now, she has brought the Russian soul to Notre Dame .

There is an air of mystery in the rich linguistic culture of Russia, where 35 different official languages are spoken, and over 190 ethnic groups like Russians, Tatars, and Ukranians come together as a nation. That air of mystery is reflected in Sabina, a Russian of Tatar heritage who is proud of her country and its rich and colorful history. A specialist in three languages (Russian, Tatar and English), Sabina is originally from Kazan, Russia, the fifth largest city in Russia and a major cultural and educational center. Kazan is set in the hills and ravines just north of the confluence of the Volga and the Kazanka rivers. Sabina has not just traveled throughout Russia, though. She has also  traveled around the globe, visiting countries throughout Europe, Asia, and Northern Africa. Most recently, she lived in Kaliningrad, a city in Russia between Poland and Lithuania. Here in South Bend, she brings all of her experiences and knowledge to Notre Dame students as an FLTA.

Sabina began her teaching career later than most.  At first, she was hesitant to begin teaching because she didn’t enjoy her experience in university, but upon further reflection, she attributes this to the fact that her curriculum was very old-fashioned. After working a variety of jobs where she saw no future, Sabina decided to give teaching a try. She transitioned to teaching English full-time through a private language school that specializes in preparing students for international fluency exams. Sabina has a wide variety of clients, ranging from young children in grade school to adults working full-time. As a trilingual traveler, Sabina was quick to emphasize the importance of learning a new language. As she continues to travel, she has appreciated her ability to communicate with new groups of people and learn about new cultures. This was only made possible by her trilingualism. Sabina has plans to continue to travel and is excited to learn new languages that will take her to new places. In doing so, she is truly able to engage new communities and learn new perspectives that challenge her thinking. Despite her excitement, Sabina is also realistic with the process of language learning. It can often be difficult and time-consuming, but she stressed the importance of finding motivation. If you are constantly reminding yourself of the monumental payoff of fluency in a new language, it is easy to stay motivated and the learning will be made easier. Furthermore, Sabina said that language learning is a lifelong process. While fluent in English, she still has moments in which she struggles. She said language learners should become comfortable with making mistakes, and embrace the learning process, as it never stops.

Sabina was introduced to Fulbright through two colleagues who were accepted into the program. One of them also taught at Notre Dame in 2018 as a FLTA. She applied and was accepted, and now Sabina shares the soul of Russia with Notre Dame students, where she teaches two Russian language classes and a class entitled “A Virtual Tour Across Russia”. Her classes are more advanced and she has her students focus on Russian movies and classics, engaging in discussion in Russian. She enjoys that she is able to help students practice their speaking abilities while also showing Russian culture. In her other class, she teaches students about different cities throughout Russia, helping students gain a better understanding of life in Russia. Sabina also leads Russian Language Tables at the CSLC. During these sessions, she encourages students to practice Russian through mediums such as board games and song discussions. This creates a fun, lighthearted atmosphere for students to practice Russian with people at all levels of experience.

Sabina will be teaching several classes in the Spring of 2022, including Introduction to Russian (10001), Intermediate Russian (22103) and an Advanced Russian Tutorial class (42103). She also leads the Russian Language Tables exploring games, music and more in order to share her her language and culture with people interested in practicing Russian. For more information about Russian classes and events, contact the CSLC at cslcstaf@nd.edu, or visit the Russian program in German and Russian Languages and Literatures to learn more about Russian classes offered at Notre Dame.

Featured image photographed by Ahmed Shams, a visiting scholar from Notre Dame Bangladesh, who started his career in journalism and has been working in audio-visual communications since 2010.