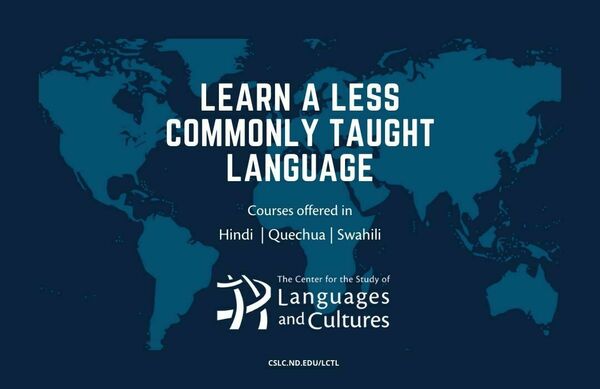 Any student who has ever stepped inside the Center for the Study of Languages and Cultures knows that this is where the world meets. The flags of countries from all over the world are displayed overhead and throughout the center. Student-workers greet them with a smile, and music from around the world plays in the background. Computers, available for student use, invite students to study and work. Peer Tutors will be scattered throughout as they meet with students to help them practice languages they are learning, and the window to the Multipurpose Room allows visitors to watch as classes and workshops unfold, and words in different languages are written on the whiteboards.

The language courses taught in the CSLC, though, are not  the most commonly taught languages such as French, German, Italian, or Spanish. The CSLC offers Less Commonly Taught Languages, or LCTLs (pronounced lick-tul).

What are Less Commonly Taught Languages?

LCTLs are world languages that are underrepresented in the US education system. Approximately 91% of American college students study French, German, Italian, or Spanish according to the National Council of LCTLs while only 9% take non-western European languages like Chinese, Arabic, and Russian despite the fact that the vast majority of the world population speak these languages. Notre Dame offers many Less Commonly Taught Languages including Chinese, Korean, Arabic, Russian, and more. To supplement the LCTLs taught by different departments, the CSLC also offers courses in three LCTLs: Hindi, Quechua, and Swahili.

Hindi has over 400 million speakers making it the fourth most commonly spoken language in the world. It has been identified as a language of "critical need" by the National Security Language Initiative and serves a critical role in the global market as India is expected to become the world's third-largest economy. Hindi also has a long literary tradition and, as India grows economically with more companies expanding into the country, opportunities for work and study are also growing.

Quechua is the indigenous language of Peru, with origins tracing back to the Incan Empire. Although Quechua is considered an endangered language, variations of it are spoken by 8-10 million people throughout the Americas, including in Columbia, Ecuador, Peru, Bolivia, and Argentina. Quechua language courses are of special interest to students who want to learn about the Quechua language, culture, and society; who are interested in studying abroad in the Andes/Amazonia; or who are working in areas such as Anthropology, Linguistics, Archeology, Spanish, History, International Studies, Political Science, Geography, and many other disciplines!

Swahili is the national language of Kenya, Uganda, and Tanzania but is spoken by over 100 million people throughout eastern and southeastern Africa. It is the most widely spoken indigenous language in Africa. The unique opportunities to work and study throughout the African continent will be open to students who choose to learn this important and impactful language.

All of these courses are taught by native speakers who are invited to teach through the Fulbright Language Teaching Assistant program. This year, we are excited to have three amazing teachers for our LCTL classes. Amrita Sharma is from India and teaches Hindi. Clement Kigelulye is from Tanzania and teaches our Swahili classes. And Delia Salazar Acuna is from Bolivia, and teaches our Quechua language classes.

Why should you learn an LCTL?

Learning a new language is also useful as it advances creativity and critical thinking skills, which will ultimately enhance any career.

Students will also receive a cultural perspective as they learn to apply their language skills in a real-life context. Students may enhance their education with an understanding of the economic interests, cultural value, and societal impact of indigenous or developing nations.

Experience with an LCTL makes students' resumes stand out and can open a vast array of opportunities. The U.S. government emphasizes the importance of studying non-western-European languages like Hindi and Swahili for economic and national security reasons and offers grants and scholarships to students who pursue the languages. Any student, whether their interests lie in business, medicine, law, or social work will find LCTLs critical to pursue work or research in developing communities in South America, India, or Southeast Africa. An LCTL will also boost the qualifications of a student who intends on pursuing a translation or interpretation career.

The CSLC is available to help you learn not only LCTLs, but all of the languages taught at Notre Dame. Services include Peer Tutoring, language learning software, English for Academic Purposes (EAP), and intercultural competence support. To learn more, visit cslc.nd.edu or contact the center at cslcstaf@nd.edu.